Abstract: Biofiltration is frequently employed as a stormwater treatment system to reduce phosphorus pollution and prevent eutrophication. Biochar is expected to have excellent potential given its large surface area and microporous structure. This study investigates the efficiency of biochars produced from different feedstocks and pyrolysis temperatures (350 to 900 Â°C) produced at NRRI, commercial biochar, and iron-based filter media (iron enhanced sand, goethite, and taconite) for the simultaneous removal of PO43-, NO31-, and DOC from synthetic stormwater via batch sorption experiments. Results showed that treatment efficiency is influenced both by pyrolysis temperature and feedstock, exhibiting promising nutrient and DOC removal with biochars produced at higher temperature. Whereas biochars produced at low temperatures had limited removal or released PO43-, NO31-, and DOC. Release of DOC and nutrients may be attributed to biochar volatile matter content and acid functional group density. Results also showed evidence of both nutrients and DOC removal by iron-based filter media. Thus, nutrient and DOC can simultaneously be removed using a mixture/layer of biochar and iron-based material. To use these results to inform testing at the field scale, biochar produced at NRRI will be installed as a sand amendment in demonstration treatment cells for removal of pollutants from parking lot runoff. The performance of the filter media will be tested with respect to various water quality parameters including total dissolved solids (TSS), total and dissolved phosphorus, nitrate/nitrite, chloride, E. coli, trace organics, and trace metals. Performance of aged media will be tested and bioaugmentation analyzed after the field season. Results of this study will provide critical field-scale testing for technology application and inform the selection of feedstock and pyrolysis temperature to tailor biochar production conditions in a way that enhances stormwater treatment efficiency. 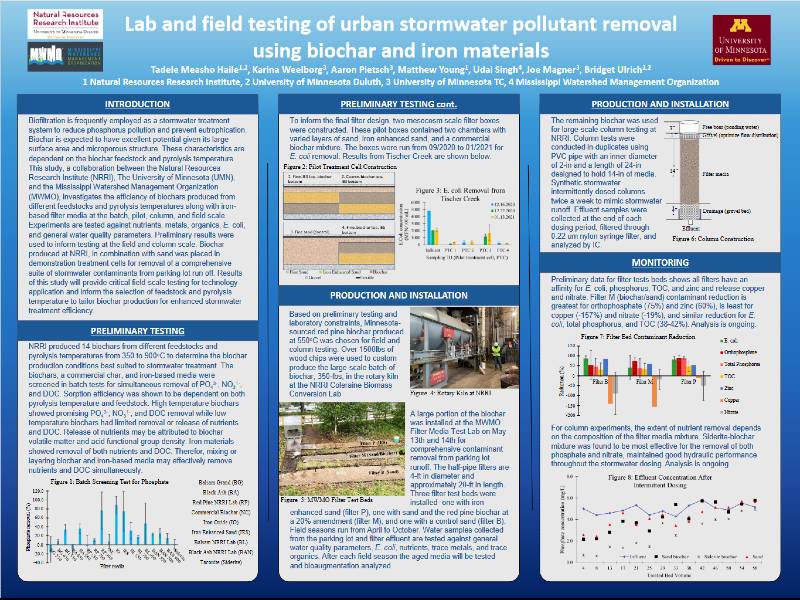