Abstract: Cyanobacteria harmful algal blooms (cHABs) are an increasing threat to freshwater lakes due to their ability to rapidly proliferate and produce potent toxins. cHABs can develop in Minnesota lakes during summer, thereby posing a great risk to humans, pets, and ecosystem health and services. Land use and environmental drivers that cause cHABs to develop in lakes and subsequently cause them to produce toxins remain poorly understood, making it difficult to predict where and when toxic blooms will form. As part of a larger Minnesota Sea Grant-funded project, the goal of this research is to identify factors contributing to toxic cHABs in MN lakes. We conducted ecological surveys every other week on a subset of the MN Sentinel Lakes with varying latitude, ecoregion, watershed characteristics, and lake morphometry. Water samples were collected for water chemistry, cyanotoxins, and chlorophyll and phycocyanin pigments. As anticipated, we observed higher algal biomass in southern lakes than northern lakes, but the northern lakes never experienced blooms despite historical accounts of cHABs in those lakes. cHABs in the southern lakes began in early summer and peaked in the fall, whereas mid-latitude lakes began blooming in mid-July. Greatest toxin concentrations were observed in southern lakes, specifically early fall correlating with peak cyanobacteria abundances. Greater algal biomass and toxin concentrations in the southern lakes can be contributed to greater agricultural and developed land use. Our results suggest that temperature, lake morphometry, and surrounding land use all contribute to the occurrence, timing, and toxicity of cHABs in MN lakes. Continued research will allow for better understanding of these complex, interacting dynamics. Managers may use the results from this study to identify lakes at high risk of toxic bloom formation and help inform best management practices regarding their mitigation and surrounding land use decisions within their watersheds. 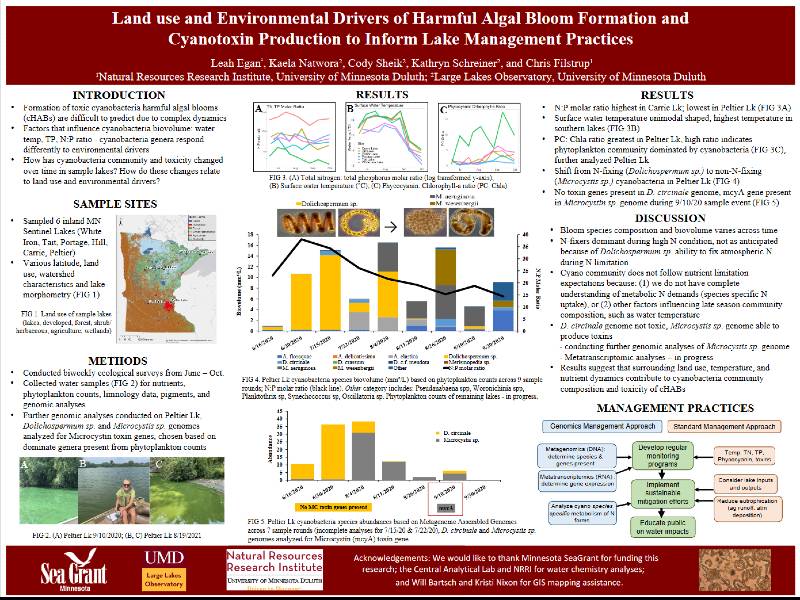