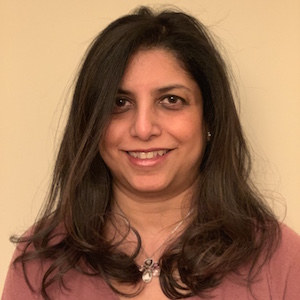 Ritu Saksena joined the College of Continuing and Professional Studies in 2013 and is currently the Associate Dean for Graduate Education, overseeing graduate programs and English language programs. She led the development of the following new degree programs: MPS in Addictions Counseling and MPS in Civic Engagement, a graduate certificate in Human Sexuality, and a graduate minor in Addictions.

Ritu has over 20 years of experience in higher education leadership, having served in positions at the University of Illinois, University of Maryland, and Johns Hopkins University. Her career spans publishing, research, and teaching. Her academic training is in postcolonial studies, cinema studies, and 20th century fiction. Ritu has taught several courses in South Asian literature, cinema studies, film theory, women’s literature, and the 20th century novel, and has published work on topics related to world cinema, terrorism, and (anti)nationalisms at the intersections of religion, nationalism, and violence. Her research work examines the symbiotic relationship between nationalism and violence and the narratives of (anti)nationalisms that reimagine the nation through the reconfiguration of national subjectivities.