Over the last three years, Owen Benson has been working toward a bachelor’s degree in Construction Management. At the same time, he has been preparing to become an officer in one of the most elite—and dangerous—military units: explosive ordnance disposal (EOD). 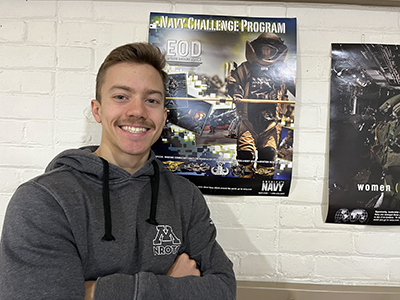 “I chose the Navy because my dad was a commander in the Navy, a nuclear reactor engineer on a ship,” says Benson, who entered the program through the Reserve Officers’ Training Corps. “I chose EOD because I have a thirst for action. It’s a tight-knit community with a sense of mission and purpose, and they’re doing very important work.”

Mostly he’s been learning things like naval terminology, roles and ranks, and uniform upkeep. That is, until the EOD officer tryouts last summer, which included a 24-hour activity called a “grit test,” a punishing exercise of physical endurance and will.

Benson says the flexible schedule afforded by the construction management program—the way it’s been designed to accommodate working professionals, with many courses offered remotely during the evening—is what allowed him to train twice a day, pass the grit test, and get accepted into the officer training program. He also finds some parallels between the leadership required in the two professions.

“The tests weren’t just physical tests. The most important thing they were looking at is whether your peers like you, which is a sign of a good leader,” recounts Benson. “As an officer, I’ll need to have the trust and confidence of my team. I’m not the one who will be kicking in doors, I’ll be the one making decisions for people who are kicking in doors. I need to understand the mission, know my people, and make sure they get paid. Honestly, it’s a lot like construction management, because you’re not going to be the one putting together the building. But you are solving problems and communicating to your team. And you understand what needs to be done and you have the responsibility to delegate.” 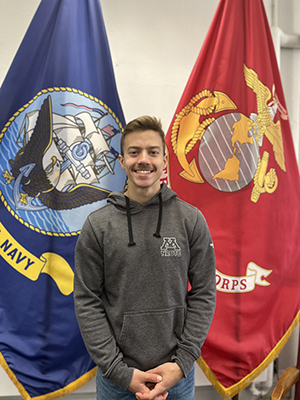 Upon graduation from the University this May, Benson will begin his five-year commission with the Navy, starting with dive training and learning the skills EOD technicians implement in the field: finding and identifying all manner of explosive devices and learning how to disarm them. “If you think of the movie The Hurt Locker, that’s the kind of stuff I’ll be learning,” says Benson.

“They cover everything that an EOD tech would have to know. That’s nuclear devices, chemical devices, improvised explosives, landmines, missiles. We’re called the ‘premier EOD force’ because we’re able to do that in the water as well as on land. We're trained to dive and to parachute. We can attach to SEAL teams or other special operations units. That’s what makes us the best, because we can go anywhere.”