This event was rebranded in 2016 as the Built Environment Career Fair and expanded to include students from architecture, engineering, and interior design. It was held on October 6, 2019, in Coffman Union Great Hall, and organized by Career and Internship Services.

Over 200 students from the University of Minnesota and ten regional Universities with Construction Management programs attended; over 70 employers participated.

The Career Fair is a successful event that attracts increasing numbers of employers each year. The employer feedback survey generates very positive comments: 40 out of 44 responding would recommend the event. The majority were planning to interview candidates for jobs or internships, and most had collected resumes for review. Half of those responding were planning to follow up with more than five candidates as a result of the fair.

Revenue from the event is returned to participating institutions in the form of a shared dividend paid to each program’s student group.

The final saw Dunwoody Institute take on North Dakota State, with NDSU winning the trophy 10 points to 8. This was the fourth time North Dakota reached the final round. Two teams entered from the University of Minnesota, including an all women’s team. The women’s team bested the men’s team in the preliminary rounds, and reached the semifinals, losing to NDSU.

In 2020, for the second time, a team of students from the Construction Management Program entered the prestigious National Association of Home Builders (NAHB) competition.  Teams submit a management proposal, on a large residential development project, in December, and present their recommendations to a jury of construction company executives at the NAHB Conference in January.  The project submission also serves as an approved capstone project, that students can count towards their coursework completion.

These projects typically require conception of a site development plan, presentation of a variety of unit types, a completed economic proforma, along with total project cost, scheduling development and a marketing plan. It is one of the tougher, more highly competitive competitions in the country for residential programs.

To provide a twist we again collaborated with a Health Services Management student: Ms. Kendra O’Brien was elected captain of this team and guided the project goals of an aging-in-place senior living community in Utah. Team participants included Michael Boerst, Mitchell Johnson, Trenton Rops, Joseph Wuestenhagen, and Tyler Stenzel. It was cited by one judge for its uniqueness of approach, above all other entries, by bringing the aging-in-place approach. And the quality of the final presentation, both oral and written, was also cited by the judges. 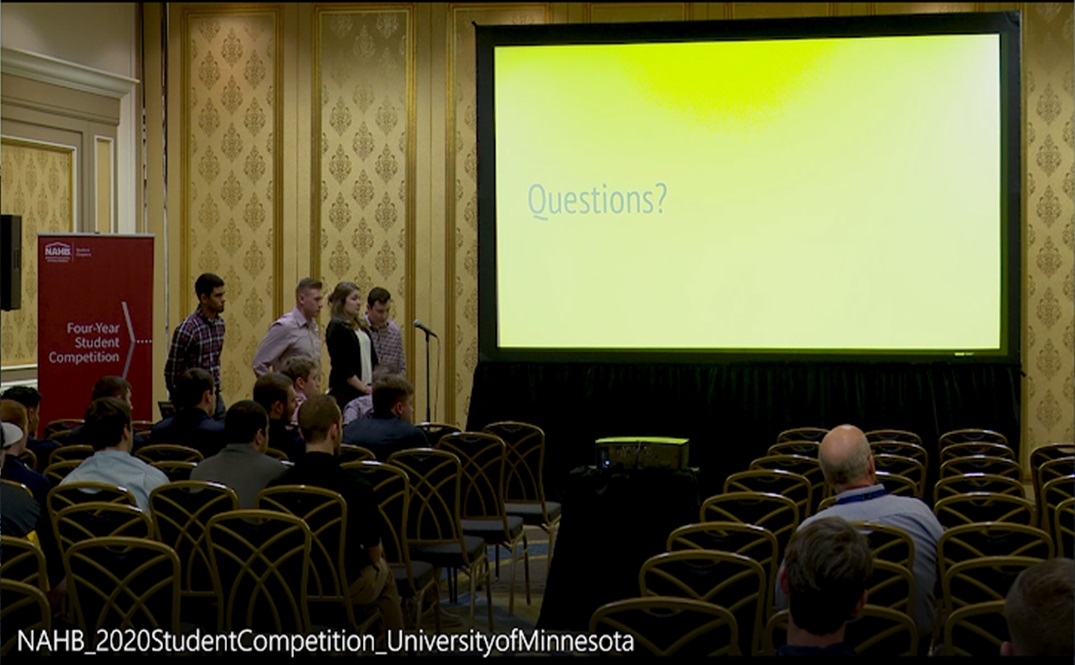 Photo: Presenting to the judges panel in Las Vegas

Note: Previously the University of Minnesota won Rookie of the Year Award by placing 14th at the 2016 competition, our first time entering this competition.

Construct*ium hosts a Spring Leadership Academy that also includes the Soft Skills competition—formerly entitled the Pentathlon—consisting of five soft skills competitions. The Minnesota Construction Association now plans to host this event every two years; because of COVID, it was not planned to be hosted this spring. However, the Pursuit Competition, always a part of this event, was held separately and for the first time, virtually, with record attendance from all the regional participating schools (except Northern Iowa who had to bow out for COVID challenges). 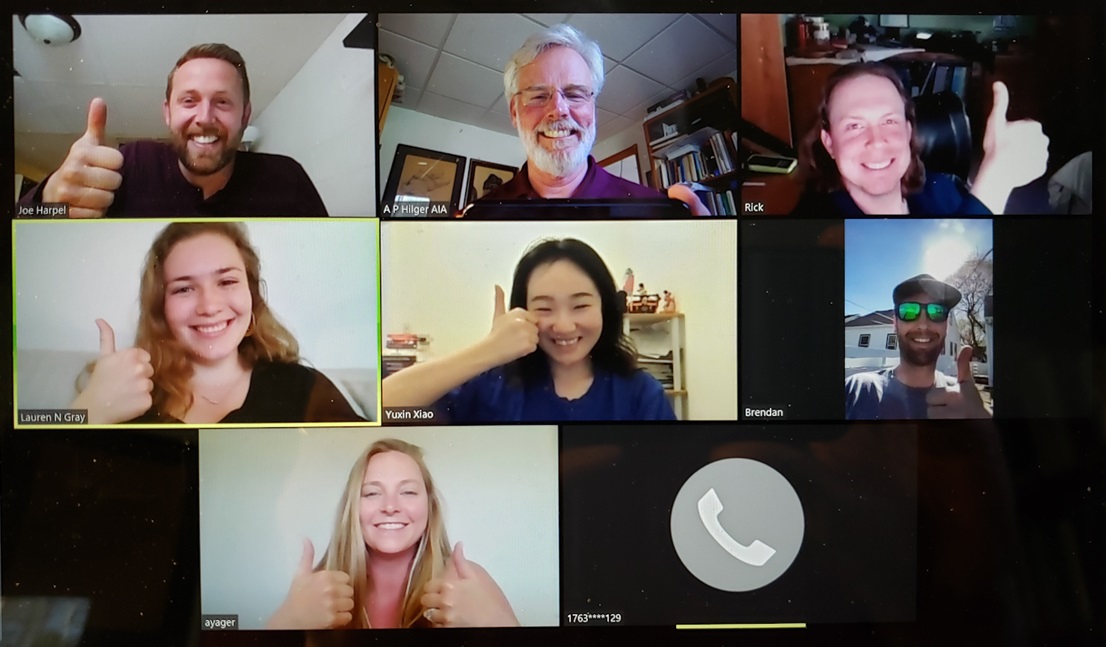 Photo: The University of Minnesota team Gabel Construction presented their proposal for the IBEW Building.

Sponsored by Ryan Companies, the Pursuit is a capstone-level competition judged by an industry panel. Ryan Construction provides information on one of their buildings: schedules, costs, and technical details of plans, as well as staff support, and the students use these to create a proposal, hoping to “win” a contract much like in real life. Nine universities that teach Construction Management—Wisconsin Stout, Minnesota State Moorhead, South Dakota State, North Dakota State, Wisconsin Stout, St. Cloud State, Dunwoody, University of Northern Iowa (could not compete this year), and the University of Minnesota—participate in this competition, each sending one team to compete. In any given year, up to 250 students may be involved in the competition. Initially an informal event started by the University of Minnesota in 2014, the Pursuit Competition became a regional fixture in 2016. This year the U of M team brought the Pursuit Traveling Trophy home for their third time, not counting an informal win in 2015.

The Golden Pen is an annual event, now in its 12th year, in the CMGT 4041W Specifications and Technical Writing for Construction Professionals course. Student teams compete by writing a design build proposal for the Shoreview Library, hoping to land one of four finalist spots for the opportunity to present their proposal before the “Building Committee” of industry constituents comprising contractors, developers, bankers, public relations personnel, and IT experts. This committee then selects a winning team, whose names are etched into a permanent trophy plaque. 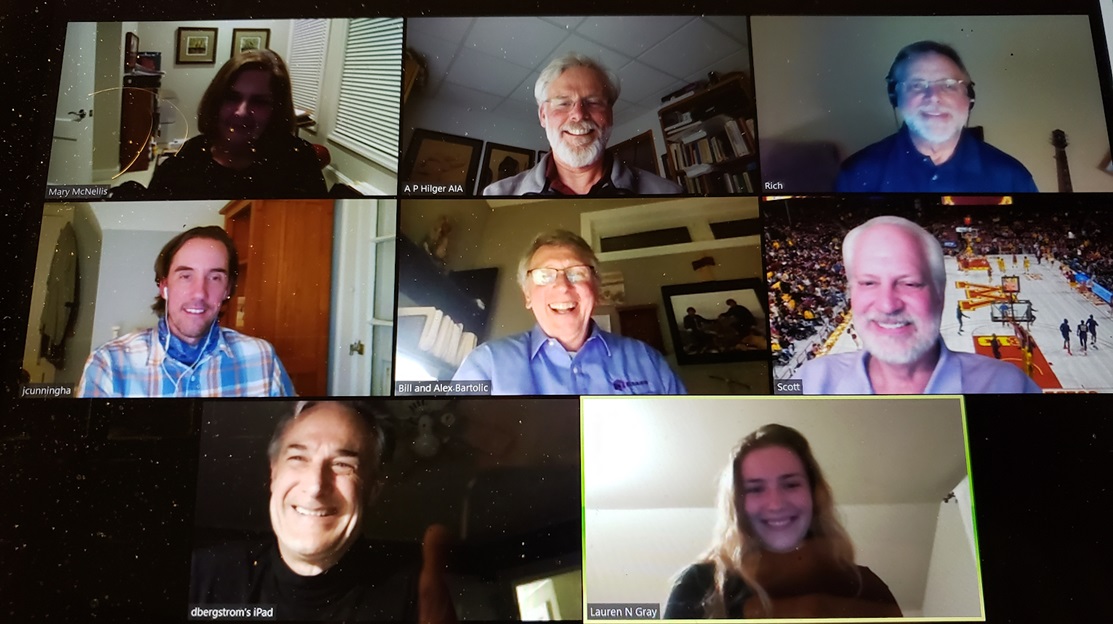 * Footnote to the competitions: A special shout-out to Lauren Gray, who in the afternoon had presented, and won, the Pursuit Competition, then within only a few hours competed in the Final Four and won. A significant accomplishment! Note as well that her team was the semifinalist in the Quiz Bowl. A graduate in spring 2020, she is now pursuing her master’s in Public Policy at the Humphrey Institute at the University of Minnesota.

During the academic year, program faculty invite professionals from varied areas of industry to attend class as guest lecturers and judge student presentations or participate through videotaped lectures and interviews. This helps students gain a broader perspective of the field, providing value-added experience to the classroom. The following are some of the guest speakers hosted in Construction Management classes during the 2017−18 academic year. Thank you to our industry speakers!

Faculty also lead site visits and field trips to further enhance the student learning experience and bring sites into the classroom via site videos. The following are some of the sites that hosted visits by a Construction Management class during the 2016−17 academic year and site videos shown in class. With thanks to our industry partners.