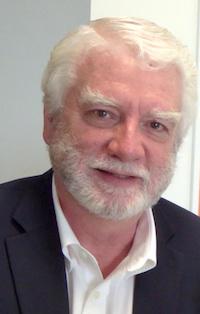 “Receiving a 2016 American Graphic Design Award at any age would be an honor,” Redmond says. “But at age 66, in a field dominated by the young, this is a special honor.”

Redmond graduated from CCAPS's program “University Without Walls,” a program that has since evolved into the Inter-College Program (ICP). He went on to earn his master’s in design from the U of M’s College of Design. In his career as a professional graphic designer, Redmond has worked on a range of projects, including design for more than 130 clients. He develops brand identity and has a special skill in book design, having provided design from more than 50 published books.

“Receiving a 2016 American Graphic Design Award at any age would be an honor, but at age 66, in a field dominated by the young, this is a special honor.”

GDUSA received more than 10,000 entries for the 2016 competition. Only 15 percent of submissions were granted awards. As 2016 is the 50th anniversary since Redmond began working in the field of graphic design, it’s a special honor, indeed.

“I was 23 when I received my degree through the University of Minnesota’s College of Continuing and Professional Studies. That was 43 years ago and ever since then my enthusiasm for creativity and for my career as a designer and artist has remained as strong and vital as ever,” Redmond says. “Receiving an award in a national competition is another affirmation of my CCAPS experience, which emphasized the importance of lifelong learning.”

Find out more about Patrick Redmond by visiting his website.