Matt Semerad was not in a good place. He had made it two semesters into his freshman year at the University of Minnesota Duluth, triple majoring in electrical engineering, computer engineering, and computer science, when he realized he had bitten off more than he could chew. He dropped out and moved back to his hometown of Saint Paul, taking a job with an electrical union, where he worked for a few years.

But there was an underlying issue that he soon realized he needed to face. “I identified some chemical dependency issues that I was struggling with,” says Semerad. “I had totaled 13 cars. I had some trouble with the law that was still hanging over my head in Duluth. And so I got sober and decided to go back to school.”

“I found home. I found what was meant for me.”

Since Semerad was motivated to help people as he had been helped during his recovery, he initially pursued a psychology degree, but soon recognized his passions resided elsewhere. After considering a few options, he says he found the best fit in the U of M’s Construction Management program. “I found home. I found what was meant for me.”

While completing his degree in his spare time, Semerad worked full-time as a construction laborer, where he made connections in many of the big Minnesota construction companies like Mortenson, Ryan, and McGough. “I spent a lot of time in the field with them and they helped mentor me in the various construction roles,” he says. “As I was approaching graduation, a bridge collapsed in Minneapolis.” 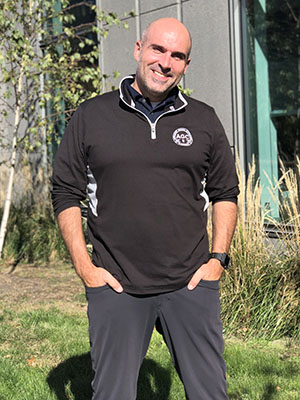 The collapse of the I-35W Bridge over the Mississippi River in Minneapolis in 2007 created an opportunity that would launch Semerad’s career in bridge-building. Through his relationships in the industry, he was offered a job on the bridge construction team as the utility design coordinator and field engineer for utilities, for which he won an award from the American Association of State Highway and Transportation Officials.

“That was a really big deal for me because, at the time, I didn't really have a lot of feathers in my hat,” Semerad says. “I didn't have a lot of confidence in what I was doing. And so for the US government to say, ‘This guy killed it, this guy knocked it out of the park,’ it was really a big deal for me.”

That recognition led to a slew of bridge projects across North America. Over the next decade, Semerad held many roles, including as the structures engineer on the Athabasca Bridge in the oil sands of northern Canada, the quality manager on the Moses Wheeler Bridge in Connecticut, and the quality control manager on the Commonwealth Avenue Bridge project in downtown Boston, which involved dismantling and replacing a bridge over live traffic in 15 days. “It was a wild rodeo right there, for sure,” he says (watch a timelapse video and summary of the project).

After working on fourteen bridge projects in as many towns—moving from place to place, living out of a suitcase, not knowing where his next home would be—the excitement began to wear off. In 2018, Semerad decided to move back to Minnesota, where he was hired as a project manager for the quality assurance group on the Southwest Light Rail project. It was during that time that he took up giving supervisory training for Associated General Contractors of Minnesota (AGC), a trade association that advocates and provides training for building and highway construction contractors.

“I want the line-level employee—the laborer, the carpenter, or the electrician—who’s looking to move their career forward to know that leadership is a viable option for them."

“I started teaching in the evenings just as a hobby to keep my game fresh, in case I ever wanted to go back to bridge building,” says Semerad, who soon took over as the director of safety and education services for AGC. In his current position, he aims to train the next generation of construction workers to become leaders, imparting the skills he learned in the construction management program and during his career, things like communications, scheduling, budgeting, and risk management. “I want the line-level employee—the laborer, the carpenter, or the electrician—who’s looking to move their career forward to know that leadership is a viable option for them. And the people coming through these classes get really excited for their future. It’s just my favorite thing. It really is.”

Reflecting on his career, Semerad says going back to school at the U of M opened many doors. Most importantly, he says it showed him how much potential he had to improve. “Education doesn’t stop in the classroom. I tell the students that, once you leave the classroom, if you continue to search and you develop your intellectual curiosity and you develop relationships and start adding to your experience, that’s when the real learning happens.”

Semerad has similar advice for anyone going into the Construction Management program. “You can do a lot more than you think you can. You really need to challenge yourself to be better and do more. When I came into the program, I didn’t think I was going to provide value to anything. This program opened my eyes to the possibility that I might, and my experiences have shown me that I can. And I couldn’t have done one without the other.”