If you tell Aalayha Robb she can’t do something, be prepared for a reckoning. “I’m the type of person who enjoys a challenge," she says. "Coming up against adversity lights a fire for me and pushes me to succeed."

That fire was sparked as Robb approached her college education. She was the first in her family to attend college, so she took the four years ahead of her very seriously. Conscious that her two younger siblings would watch what she did and learn vital lessons from it, Robb knew that earning her degree would set an example. From the moment she arrived on campus her freshman year, she wasted no time in diving headlong into a full course load. 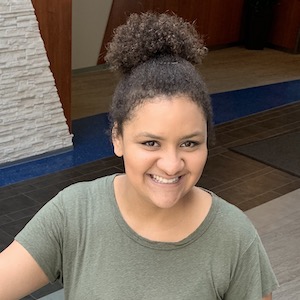 Having nurtured a passion for interior design and architecture from a young age, Robb knew she wanted to major in architecture. But as she flew through the courses and completed requirements far ahead of schedule, she asked herself what else she could study. Could she add another major?

“I just wanted more and more,” Robb says. “I have an appetite for learning, and I was interested in adding something more applied and hands-on to my design-focused architecture major. Basically, I wanted to make the cake and eat it too.”

The major she added was Construction Management—a degree program that intrigued her with its scope. Here was an area of study that would allow her to implement and actually manage the building process, bringing a set of blueprints to life.

A Career in Construction

Robb applied her signature tenacity to the Construction Management major and discovered that she had a passion for the field. Not only did she become passionate about building codes, project management, and commercial construction projects, but she also became a strong proponent for women, and especially women of color, entering into careers in the construction industry.

“Careers in the built environment are very male-dominated, and I noticed that disparity was reflected in the classroom, too. I thought to myself, ‘I need to be here, not just for myself but to make a statement in the industry'.”

“Careers in the built environment are very male-dominated, and I noticed that disparity was reflected in the classroom, too,” Robb says. “I thought to myself, ‘I need to be here, not just for myself but to make a statement in the industry'.”

As she began taking courses for her second major in Construction Management, Robb realized that many of her classmates were males raised in families where construction expertise was passed down from father to son. She recalls how visceral the challenge seemed to her early on, as a first-generation college student and woman of color who didn’t have any background in construction, Robb felt that inner fire ignite anew.

“It was a big priority for me to gain confidence. To know who I was, where I was going, and why I was doing it,” Robb says. “That was my driver. It was throughout school and it still is.”

A Confident Start to Her Career

Robb maxed out her credits each semester and immersed herself in all things construction management. She recalls being especially impressed with the soft skills she learned, like communication and problem solving, because she knew they’d be useful in any number of real-world situations. By the time Robb was finishing her final courses in Construction Management, she had become known for her strong grasp of construction principles as well as her positive attitude, which made her every classmate’s top pick when it came to group projects.

“I thought, ‘I don’t have to prove myself anymore.' People can tell you a million times that you’re fine, you got this. But until you feel it, it doesn’t matter. I had my moment. I got this.”

She vividly remembers several male classmates messaging her to ask if she was available to be their partner for a group project during her senior year. Having gone from feeling like an outsider to feeling like she was at the top of her class, Robb glowed with that confidence she was after all along.

“I thought, ‘I don’t have to prove myself anymore,’” Robb says. “People can tell you a million times that you’re fine, you got this. But until you feel it, it doesn’t matter. I had my moment. I got this.”

Applying Her Degree in the Real World

During the summer before Robb’s senior year in college, she landed an internship with Knutson Construction. There, she applied the many skills she’d developed in her courses. The experience was so great that Robb knew she wanted to pursue full-time employment with the firm after graduation. Even though she was offered positions with two other construction firms in the metro area, Robb held out for her number-one choice. 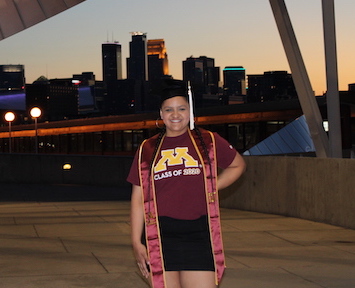 “I decided to hold out for Knutson and decline the companies that had offered me positions. I knew that if I didn’t want to be anyone’s backup option, I shouldn’t do that to anyone else,” she reasons.

Robb landed the position. In May she was offered a full-time position with Knutson as a Virtual Design in Construction Specialist. Her day-to-day work involves using a lot of cutting-edge technology to develop and manage construction projects even while working remotely. For example, Robb uses a laser scanner to map construction sites into digital renderings, which enables virtual visits to job sites during concerns around COVID-19. She also spends time modeling projects and managing a team before breaking ground. Robb is so excited about her job that she’s wondered several times if it was too good to be true. She glows as she talks about the team she’s on and the opportunities she’s pursuing in commercial construction. Her success is certainly the result of lots of hard work and determination, and an inner drive to prove she can do whatever she sets her mind to.

“I just want other women and women of color to know that they can do this, too,” Robb says. “There are always moments of intimidation, but just know that with determination and passion, anybody can do it. I promise it’s possible.”

Aalayha Robb is a recipient of the Mary Schweiger McNellis Scholarship in Design and Construction Management.