As the school year came to a close and students were juggling final exams and job applications, Charlie Morrison was cool as a cucumber. He had a job lined up and waiting for him at the Hennepin County Government Center. With his freshly minted undergraduate degree in Information Technology Infrastructure (ITI), he was able to make a quick and clean transition from his years as a college student to the beginning of his career in IT Infrastructure.

From an early age, Morrison was fascinated by technology, which was evolving before his eyes. He remembers talking to his dad about it, in conversations that proved to be influential in molding Morrison’s path. (His dad works for Hennepin County doing IT work, as well.)

“I’m super interested in cool technologies that are just coming out, like self-driving cars,” Morrison says. “The whole field of tech is this ever-changing landscape. I love that it’s never the same for long.” 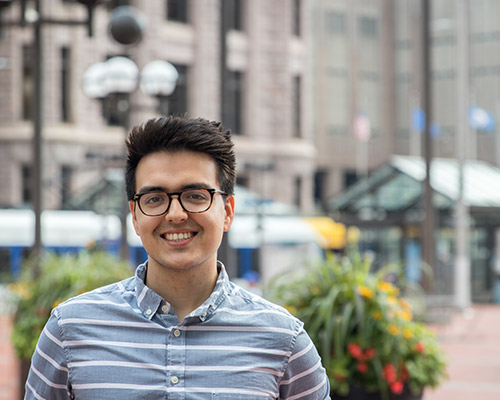 It was a given that Morrison would pursue an education in technology, but once he was a freshman at the U of M, he discovered that his interest in IT was more nuanced than he realized. Having started out as a computer science major, he soon saw this was not the direction for him and pivoted into a major that felt like a better fit: Information Technology Infrastructure (ITI).

“My advisor recommended that I look into the ITI program, and it made a lot of sense for me,” Morrison says. “It’s that combination of technology and business that I like, and it allows me to do more communication and interacting with people, talking about IT issues. I realized I really enjoy this. The path began to carve itself for me.”

Morrison emphasizes the value of communication skills in the IT sector, and he points out that this soft skill is one that’s woven into all ITI courses. Those communication skills, in addition to all the facets of ITI—networks, DevOps, systems, security, and more—were a crucial part of his education.

“By having business knowledge and technical knowledge, you’re able to give people insight on what you or your team is working on,” Morrison says. “I can explain Java code to executives, for example, and I can point out what works or doesn’t work. Having communication skills is just as valuable has having technical knowledge.”

“The whole field of tech is this ever-changing landscape. I love that it’s never the same for long.”

Morrison reflects on his coursework in the ITI program and calls out a couple of classes that kept him riveted. Learning about systems in his “Intro to Systems” class, Morrison got to feel like a systems administrator, and he delved deep into the nitty-gritty of hardware and computer devices, studying how they communicate among themselves, too. He was also fascinated by a security course he took, wherein he and his classmates learned to be “white-hat hackers.”

“We learned how to navigate around inside the computer, hiding our steps as we went along,” Morrison says. “This is how you learn to think like a hacker in order to prevent security breaches.”

Another perk to the ITI program, Morrison says, was learning from adjunct faculty instructors who taught from experience.

“They have the best hands-on experience to give you,” Morrison says. “They’re a lot less intimidating, too.”

Morrison sought out an internship with Hennepin County to dip his toes in the fast-moving stream of IT, applying what he was learning in the classroom to the real world. He got the internship he was after and was soon part of a team undergoing IT change management—essentially playing a sort of traffic cop when it came to many different technology projects happening concurrently in Hennepin County. Morrison’s communication and management skills came in handy there. 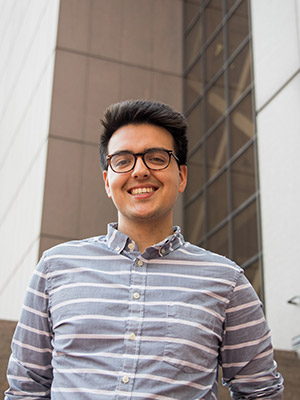 The following year his internship with Hennepin County was renewed, only this time around he worked with a team to design, test, and plan a new application. This led to more experience in a wider scope of IT work.

“I have to thank certain ITI classes that helped me have a better understanding of the work I’m doing,” Morrison says “Without those, I’d have no idea about database structures within the application and how databases and certain applications talk to each other.”

Morrison proved himself a valuable addition to the team through his internships with Hennepin County, and just as his second internship was drawing to a close and he was about to graduate, Hennepin County Government Center offered Morrison a full-time job as a project administrative assistant—a role he eagerly accepted. His last day of his internship was a Friday, and he reported for work as an employee the following Monday.

“Now I work for the business technology solutions department,” Morrison says. “I’m on a data migration team, which coordinates and develops new applications that the County can use. I’m learning a lot, and my job requires a lot of communication and meetings.”

It’s nothing he can’t handle, thanks to his preparation over the last four years and his endless curiosity about technology.