Technology can be like a trick mirror. We’re so intimately familiar with the screens we gaze into every day, but the longer and harder you think about any given fragment of technology, the more you realize it has unseen depths and is totally abstract in nature. This complexity intrigued Ian-Mathew Hornburg and drew him to pursue a career in IT. To him, the tools we take for granted today, like the supercomputers we carry in our pockets, are the result of modern-day magic. 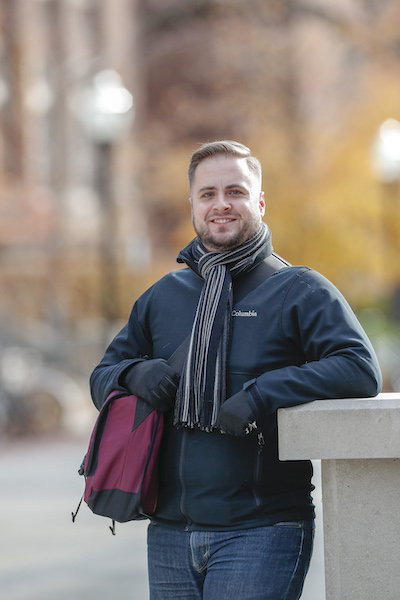 “IT practitioners learn tons of complicated languages to make technology do things in the real world,” Hornburg says. “You’re combining the physical and the abstract to make really important things happen.”

As it turns out, Hornburg’s job has everything to do with making really important things happen. He works for U.S. Bank in their anti-money laundering and financial crimes division, where his primary responsibility is ensuring the efficient processing of massive amounts of data every day and constantly improving the quality of that data. He’s also earning his bachelor’s degree in Information Technology Infrastructure, with a specialization in data science—an apt focus, given his day-to-day work in the financial sector.

“I love data science because you’ve got one foot in theory and the other in applied business,” he says.

It’s Hornburg’s application of this knowledge that ultimately has a big impact on consumers, regulatory compliance, and how large, complex systems like financial institutions function in the world.

Every night, a tidal wave of customer and account records flood U.S. Bank’s data-processing systems. It’s Hornburg’s job to harness this data, writing the programs that comb through this account information night after night. Supporting anti-fraud and financial crimes investigators, Hornburg plays an important role in the delicate balance of managing the customer data that circulates in the nation’s fifth-largest commercial bank.

“The volume is easily the biggest issue,” he says. “It’s one thing to do this in a class or on your laptop. It’s another thing to be prepared for 70 million records hitting the system every night. You really have to be on your game. If you write programs that aren’t efficient at that scale, you’re talking about adding hours to how long a process has to run, which could lead to problems downstream.”

The other issue that Hornburg grapples with on a daily basis is data quality. “Data is messy,” he says. “As they say: garbage in, garbage out. So if we get unexpected or invalid data in, how do we ensure that what comes out the other end is a reasonable result that doesn’t cause more issues? For me, this requires iterative development and continual process improvement.”

“Communication is important to bridge that gap between user and technician to solve problems. You meet in the middle and that’s where all the magic happens.”

Hornburg faces these kinds of issues every day at work, but he’s also supplementing his on-the-job experience with applied knowledge from the classroom. Through his IT Infrastructure (ITI) courses, he’s gaining the business acumen, technical skills, and applied scenarios that make him even better at his job. And he’s had ample opportunities to allow work and school to cross-pollinate, each informing the other. Since ITI courses are taught by industry professionals, Hornburg is able to have the kinds of conversations that are rooted in application. He can also acquire the necessary soft skills, like communication essentials, to truly excel as a leader in his field.

“Communication is important to bridge that gap between user and technician to solve problems. You meet in the middle and that’s where all the magic happens,” he says.

A Degree to Support a Career

Hornburg’s natural interest and self-taught skills in technology got him in the door at U.S. Bank, where he’s been working for the past seven years. But he knew that without finishing his undergraduate degree, he’d hit a wall. So, in 2016 he returned to the U of M and enrolled at CCAPS. The ITI degree immediately resonated with him because he recognized core elements from his day job in the curriculum.

“The mix of programming, business, accounting, technical writing—it’s a natural fit. So I dove in, and it’s been great. With my perspective of working in industry for so many years, this is way more useful than a traditional computer science degree. It’s well-rounded in a way that is eminently practical.”

“The mix of programming, business, accounting, technical writing—it’s a natural fit. So I dove in, and it’s been great. With my perspective of working in industry for so many years, this is way more useful than a traditional computer science degree. It’s well-rounded in a way that is eminently practical.”

Hornburg has one year left in the ITI program, and he’ll be spending it going deep in the data science track. With a full-time job that he’s already juggling, he didn’t need to do an internship. Rather, he chose to do a directed study instead. His tendency has been to approach work and school in a very thoughtful way. Thinking beyond the brass tacks of how to land a job in IT, Hornburg also contemplates larger issues, like ethics and professional responsibility among IT practitioners.

In his final presentation on his directed study project, Hornburg told his audience, “Automation means you can be biased faster.” 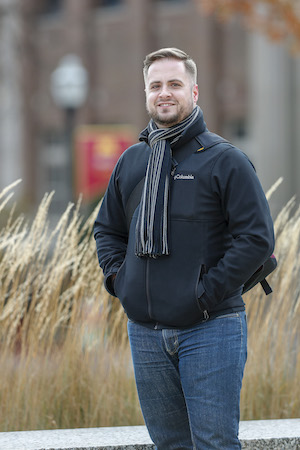 When asked what he meant by this, he elaborates: “We entrust our information to companies that use our personal data in ways that ultimately protect privacy and help customers enjoy better service. On the other hand, that same data could be used for really nefarious deeds. And ultimately, those unethical uses of technology don’t happen unless someone deliberately makes it so. We as IT practitioners have a choice in whether or not we do that kind of work, and it’s important not to lose sight of how the technologies we develop are used. If there’s bias encoded into our systems, or certain implicit assumptions are being made, it could result in a disparate impact on a particular population of people that wouldn’t happen at that kind of magnitude if not for automation.”

Fortunately, with deep thinkers like Hornburg in the IT industry, the future of big data and beyond is less of a trick mirror and more modern magic. It’s a future that looks bright and full of possibility.