From a childhood spent learning in a one-room country schoolhouse to lifelong pursuit of a college degree, Betty Sandison has always deeply valued education. The words “bachelor’s degree” sounded so impressive, and she was determined to earn hers.

Betty first enrolled as a student at the University of Minnesota in 1955. The first in her family—including her extended family—to go to college, she thought about becoming a nurse, and later considered a career as an elementary school teacher. To pay for the education that would make those careers a possibility, Betty worked as a waitress at her town’s local restaurant, serving hamburgers and cherry Cokes, to earn enough money to cover her college expenses: $600 for the year. 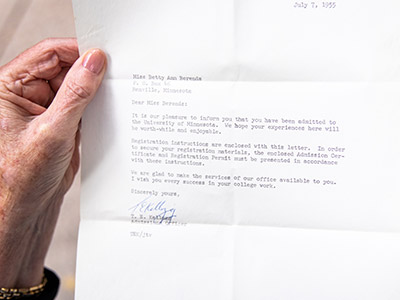 During her first year at the U of M, Betty enrolled in a program to become a Licensed Practical Nurse (LPN). Her freshman year went by in a blink, and at the end of it Betty put her LPN certification to use, working at the University’s hospital. But a year of education wasn’t enough for Betty. She wanted to earn her bachelor’s degree in education, too. In 1957 she enrolled in an Elementary Education program at the U of M and began working her way toward her degree.

Before she could see her degree through, however, fate stepped in. Betty met a chemical engineering student at the U with whom she began a relationship. And on a crisp fall day in 1960, Betty and that engineering student were married. They started a family together, and Betty put her dream to earn her degree on hold.

Now, more than 60 years later at age 81, Betty is back on campus, completing the degree she’d dreamed of for a lifetime. Her goal is to complete her degree with a major in Multidisciplinary Studies (MdS) by the time she turns 85 years old.

Back in 1961, Betty traded the hallowed halls of campus for student housing, living on the corner of Gibbs and Fifield in Saint Paul. She stayed home and raised two daughters while her husband finished his studies. Later, his job required the family to move to various cities across the Midwest, including Chicago and Detroit. Throughout the moves and changes, Betty never forgot her dream of finishing her degree.

In 1979 when Betty and her husband divorced, Betty went to work full-time as a nurse, relying on her LPN certification from the U to get her foot in the door. There, she realized she needed more training, so she enrolled at a community college in the Twin Cities to earn her associate's degree to become a registered nurse. Betty worked in nursing for the majority of her professional career. Still, she thought about that bachelor’s degree she’d begun in the late 1950s. While it would be another 38 years before she’d return to the U of M, Betty always looked for new opportunities to fulfill her adventurous spirit.

“I always had this in the back of my head that I wanted to go back to school to get my degree. I never said anything. It might have been fear of not getting support from others.”

She found work as a traveling nurse, spending three months in Florida and three months in California. She went on bus tours to see all the major league baseball stadiums in the United States. And, for two weeks every year, she’d work at the Minnesota State Fair, driving a shuttle bus and later working at an information booth. Throughout her adventures a small voice whispered the word “degree.” She hadn’t forgotten.

“I always had this in the back of my head that I wanted to go back to school to get my degree,” Betty says. “I never said anything. It might have been fear of not getting support from others.”

But Betty found that her family and friends were excited for her to pursue a lifelong dream. She recalls going out to lunch with a group of close friends and confessing that she’d always wanted to get her college degree from the University of Minnesota. “What’s stopping you?” one of Betty’s friends asked. Betty admitted that she didn’t have a good answer. Later that week, she attended an information session to learn more and met her future academic advisor, Karolyn. 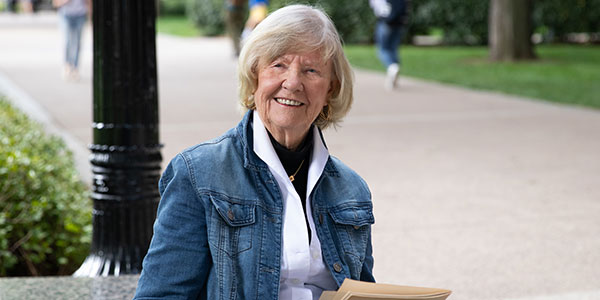 “My advisor Karolyn got me through my first class in which I wrote the proposal for my degree,” Betty remembers. “During the first three weeks I struggled, thinking there was no way I could do this back-to-school thing. But my advisor supported me and I hung in there, and all of a sudden the lights went on. I wrote papers—good papers—and I got an A- in that course! I thought, Okay, I can do this.”

Not only could she do it, Betty could excel as a student. She took three more classes soon after her first: one on the history of baseball (Betty’s a big baseball fan), one in gospel choir, and one in philosophy. She received A’s in all three classes.

For Betty, education is an adventure, an opportunity, and a gift. Ever since her first year on campus in 1955, she experienced deep satisfaction at the prospect of learning. That satisfaction continues today as she takes course after course, moving steadily toward earning her bachelor’s degree. 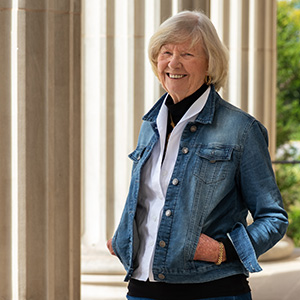 The MdS major is designed to combine the student’s choice of three interdisciplinary themes. Betty’s elementary education coursework from the 1950s transferred over to her current degree program, and she was able to satisfy the requirements for one of the three themes: applied technical/professional. As for the remaining themes, Betty chose to pursue arts/humanities and science/health science. One course at a time, she’s advancing toward earning the degree she’s dreamed of.

“My goal is to graduate by the time I’m 85. That gives me four more years,” says Betty, who doesn’t intend to pursue a new career with her degree. She simply wants to enjoy the education and the accomplishment of knowing she finished the degree she started. “When I finish my degree, I’m going to have a big party,” she says.

In the meantime, as she completes her degree, Betty has become an advocate for others to go back to school—no matter what their age is.

“I think it’s fear of the unknown that stops people from going to college later in life,” Betty says. “I tell people I’m having a ball. It’s good to be back. I love being on campus.”

Giving Thanks to Her Advisors

Betty has had two academic advisors during her time at CCAPS pursuing her degree, both of whom have been integral to her motivation and pursuit of her degree. She wishes to acknowledge and thank Karolyn Redoute and Karen Moon for their support along her academic journey.