Embracing Different Ways of Being

Instructor Meena Natarajan grew up in India, where she was delighted with a mixture of different languages, religions, cultures, foods, and rituals. “I’m coming from a base of complete multiplicity,” she says.

“So I'm very passionate about that and about people really grounding themselves in their own way of being. What we talk about at Pangea is a ‘pluralverse,’ because it's the idea of multiple people coming together to do work. And how can you do it in a way that respects everybody's culture, everybody's way of being?”

A Multiplicity of Ways 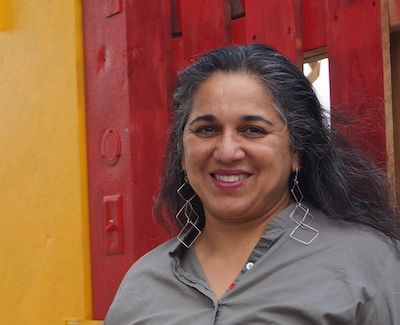 Natarajan is cofounder and executive artistic director of Pangea World Theater. Her new course, A Multiplicity of Ways: Epistemologies in the 21st Century (ACL 6001), is a requirement in the MPS in Arts and Cultural Leadership program. It explores different global concepts and practices from many points of view. It provides a framework for students to begin to look at the world through multiple lenses while staying grounded in their own identities.

“How do we all come to a common idea of knowledge? How do we come to a space where we can understand each other? Where we can actually do something, build a movement together, but stay completely true to ourselves? Those are the kinds of questions we ask,” Natarajan says.

"The current projects that we have are all about healing and community, because right now that's the most important thing.”

“I feel like if people are very rooted in themselves,” she continues, “it's actually easy to find the common ground that you need to find. So the course talks about the idea of debunking the notion of a universal or a homogeneous way of looking at the world.”

Natarajan has been actively engaged in teaching and producing art for years. Pangea, on Lake Street, has been creating community-based work since their inception. They’ve run programs with Indigenous people, the East African community, LGBTQ folks, women, and many others. 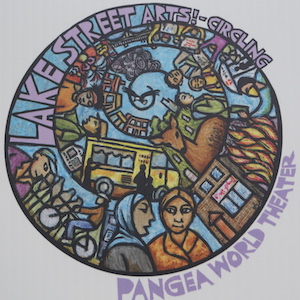 “I remember one very seminal moment,” Natarajan says, “when a couple of people from the Somali community came (to see an Indigenous Voices performance). And they said, we want this in our community. We said we'd love to, but what we'd love to do is create something where people come together.”

And that was the genesis of the Lake Street Arts placekeeping program. Lake Street Arts (LSA!), according to the Pangea website, “uses art as a tool to shape development plans and visions for a more just, sustainable, and livable Minneapolis.”

Pangea also has a National Institute for Directing and Ensemble Creation that supports people of color in creating a theater piece with special emphasis on non-Western techniques and social justice. 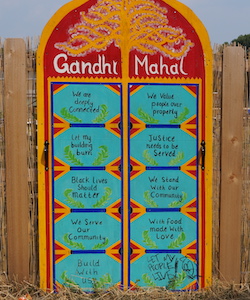 Each new Institute kicks off with a dinner at Gandhi Mahal, the restaurant on Lake Street that burned down last summer and whose owner, Ruhel Islam, famously said, “Let my building burn. Justice needs to be served.”

Pangea has had a relationship with Islam and Gandhi Mahal, along with other area businesses, for years. Recently, Pangea’s Poetry in the Windows project installed 21 poems in windows and boarded-up storefronts on Lake Street from Lake Bde Maka Ska to the Mississippi.

So it seemed only natural that when the neighborhood suffered from fires, riots, and looting in the summer of 2020, Natarajan and Islam rolled up their sleeves and got to work.

“We had to protect our streets for days after the uprising that happened outside of that precinct,” Natarajan, who has lived in the neighborhood since 2005, recalls. “So it became very natural to be a part of Longfellow Rising.” 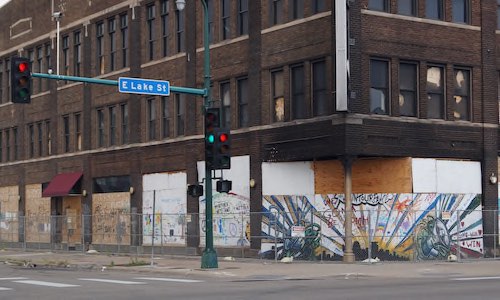 Ruhel Islam was one of the founders, along with a lawyer named Dan Kennedy. Islam immediately invited Pangea to become involved. Longfellow Rising’s mission is to rebuild East Lake Street in a way that focuses on social justice, affordable housing, economic prosperity, and environmental sustainability.

Natarajan sees Pangea’s role as uplifting the arts and cultures of the neighborhood and to help organize ideas and people to keep the place vital.

“For us, it's really about making sure that the people who already exist here are not displaced. Because that's the reality given what's happening on West Lake Street. And to increase the number of BIPOC owners as spaces become available. Pangea would like to build its own theater in that area as well.”

A Transition to Healing

Pangea and Holy Trinity Church, another key partner in Longfellow Rising, are currently commissioning a public artwork entitled The Transition Stage by Angela Two Stars. This temporary installation collects hopes and laments from people in the neighborhood on small strips of paper, which will become a cocoon. The cocoon will eventually transform into a butterfly. 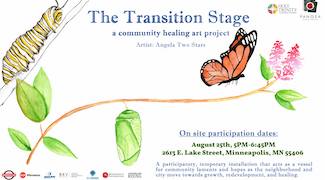 “I cannot believe what a healing process this has been,” Natarajan says. “The number of volunteers that have come along has been amazing. Architects, construction groups, all of these people giving their time for this project—it's very moving to be a part of it.”

People are drawn to this project, she says, because they recognize the need for the area to heal and be heard. “Because I feel like our community has not healed, and there's no way it can heal until we come to terms and reckon with the racism that happened. Until then the wound is just going to keep going on and on. The current projects that we have are all about healing and community, because right now that's the most important thing.”

Making Space for Everyone

This reckoning is part of why Natarajan’s course is so relevant for rising arts and cultural leaders, as well as those interested in leading community-driven change. The industry is gradually starting to center marginalized voices in its content. But this work has its obstacles. 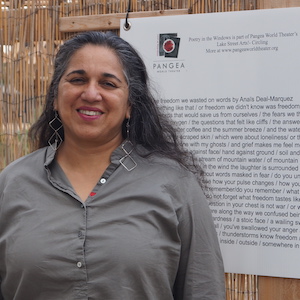 “People can talk about it in theory, but then actually when it's practiced, they cannot imagine it,” she says. “You think about the grants, the kinds of support and resources that exist to keep arts and culture alive. But whose arts and culture? When you actually start shifting that, people get very threatened.”

By the end of her course, Natarajan hopes that students will be able to address the pressing needs of arts and cultural organizations and social movements within a multicultural context.

She believes that there must be space in the arts and cultural arena for everyone, because “when we start not truly recognizing and seeing people for their full selves, we do a disservice to our world.”