While widely known, the Boy Scouts of America (BSA) motto to “be prepared” is often relegated to clichéd examples of snowstorm or snake bite survival. (Good skills, both!) But it’s more about being prepared for life—being able to “confront any challenge with a whole heart and a clear mind.”

Case in point, lifelong Scout Eric Neff, MdS '21, who has embraced the be-prepared practice with dogged determination, not only as a means to confront personal challenges large and small, but as a way to help others and live his life without regret.

So when the award-winning senior vice president for John Hancock Investments learned his position would be eliminated after a 25-year tenure, Neff launched into a flurry of discovery, personal growth, and learning.

And true to his word, he completed the college degree he began in 1979.

The Heart of a Scout

Discovery is what the BSA describes as “the heart of scouting,” and Neff’s seemingly insatiable curiosity seems to represent the notion well. Ever inquisitive and a dedicated history buff, he is both multifaceted and an active volunteer—a habitual doer, a man of side gigs.

For example, he’s been a reviewer for Headphone Guru and an audio writer and reviewer for TONEAudio and UK-based HiFi+ magazine for close to a decade. He’s a youth bowling coach and a church board member, and he was recently elected to be a town supervisor in Barnes, Wisconsin. He’s also been involved with the Boy Scouts for 50-plus years.

“You have an opportunity to have a positive influence on kids for [whom] maybe life isn't always happy every day, and you can give them tools that they can use to manage their world through all the things that happen. It's incredibly satisfying.”

But it wasn’t until 2017 when a company reorganization eliminated his position that Neff switched into high gear and accepted senior leadership roles with the BSA—all of them volunteer.

A member of the John Hancock Hall of Fame and a recipient of the prestigious Manulife Star of Excellence Award, Neff’s 34 years in the financial services industry made him accustomed to hard work and a broad sphere of influence.

Since 2021, Neff has been Voyageurs Area Council president, Territory 4 Council board chair representative to the national chair, and an assistant Scoutmaster. As president, he leads volunteer efforts to promote Scouting throughout northern Minnesota, northern Wisconsin, and the eastern Upper Peninsula of Michigan. 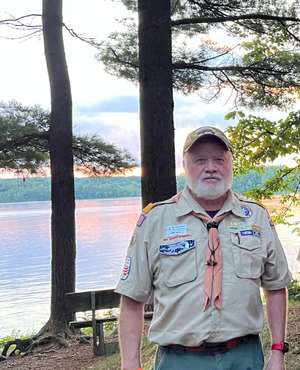 Neff also contributed to the success of international events such as the 24th World Scout Jamboree, where more 40,000 Scouts from 152 nations gathered at the Summit Bechtel Reserve. Situated in the wilds of West Virginia, the Reserve is a national Scouting center focused on changing young people's lives through training, education, leadership, and high adventure.

Significantly, he’s been an advocate of cultural and governance changes that have done away with the organization’s long-standing ban on gay youth and girls/young women.

This work has not gone unnoticed. He’s been recognized with a National Eagle Scout Association Outstanding Eagle Scout Award and the Silver Antelope Award for Distinguished Service to Youth.

“You have an opportunity to have a positive influence on kids for [whom] maybe life isn't always happy every day, and you can give them tools that they can use to manage their world through all the things that happen,” says Neff. “It's incredibly satisfying.”

But still, he admits, the lack of a degree continued to bother him. “I'm type A, and I just sit like [there’s] this leftover thing hanging over me. I gotta get this done.”

Like many of us with varied interests have found, trying to pin down an academic major can be challenging. In Neff’s first several years at the University, he changed his major several times and reveals that he felt restless, frustrated, and in need of support.

“It was one of those January days where you're walking from the dorm to class. I think it was 20 below with big wind, and you're going across the bridge to a class that I just felt was not useful for my life…” he says. “How do I get out of here? You know, I'm done paying tuition. I had almost enough credits. I mean, I needed guidance. I got none.”

It’s a story he shares with raw dream-like remembrance—as if it were a vivid scene that has played over and over in his head for years.

Neff enrolled in the College of Continuing and Professional Studies (CCAPS) at the height of the COVID-19 pandemic, what Senior Academic Advisor Lisa Garrett refers to as “the full COVID educational tour.” Translation: all courses and interactions with advisors, faculty, and fellow students, took place entirely online and at a time when many were just learning the technological ropes.

“Online classes were not a problem for me,” he says. “It all comes down to self-motivation. Do you want it? Plus, many of the courses were very interesting, making the courses fun to take.”

"Too many students in that situation go through the motions, mumbling under their breath. But, fully engaged, Eric discovered real meaning, I think, in his return, in his degree, and perhaps even in the University, with all its obscurities and bureaucracies."

He declared a Multidisciplinary Studies (MdS) major and lauds the introductory course for helping him “organize my thoughts around what I wanted out of my degree. I appreciated how it got me to think about my goals.” He also reveals, “I am the ultimate older, jaded college student—someone opened the window to fresh air. It’s frustrating to come back to school and be put where your transcript indicates [when] life experience reaches far beyond.”

But with his enthusiasm and guidance from advisors, including Garrett and fellow Senior Academic Advisor Josh Borowicz, Neff finally seemed to find a place to share his experiences and also learn. 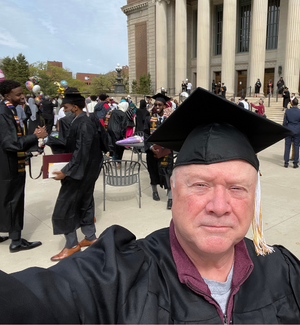 “What I recall about Eric was that while he had experienced real frustrations in his previous degree pursuit here at the University—and voiced them—he fully engaged the MdS degree planning process in general and the MdS course specifically. Too many students in that situation go through the motions, mumbling under their breath. But, fully engaged, Eric discovered real meaning, I think, in his return, in his degree, and perhaps even in the University, with all its obscurities and bureaucracies.”

For his final thesis, Neff designed a five-year strategic plan to address the post-COVID membership and revenue growth needs of the BSA’s Voyageurs Area Council. He credits his MdS coursework for providing the core of this work, noting, “So far, we have increased membership 54% in 18 months and have nearly balanced our budget from the uptick in revenue. The revenue improvement allowed us to increase staff by 50% to better serve our members... MdS 3001 [Introduction to Multidisciplinary Studies] was directly responsible for this needed recovery.”

When asked to look back and describe his journey of the last few years in just three words, Neff says: “Follow your opportunities.” And for those who are entering a second, maybe even a third career he adds, “It can’t just be about the money. It must matter to you.”

Today, in addition to his extensive volunteer work, Neff is a substitute teacher for the Drummond Area School District. Diploma in hand, he is currently seeking his Wisconsin teaching certification through the American Board.

“Finishing my degree was one of those loose ends that I had to complete,” he says. “I was so close to finishing when I left in the early '80s. It is nice to see the diploma on the wall.”

Children, education, and the environment continue to be at the top of his interest list, as does his thirst for learning, his community engagement, and his belief in service that is grounded in helping others help themselves.

When asked the number one lesson he has learned as an Eagle Scout, something that has served him well throughout his life he says, “Scouting will prepare you for the next fork in your road. Don’t be afraid to move on to the next adventure.”