Lao American playwright, poet, and author Saymoukda Duangphouxay Vongsay, MLS ’17, believes artists can be bold architects of social change, but that’s just one of the many reasons she was recently named a 2022 Bush Leadership Fellow. Vongsay adds this new role to her current roles as an Mellon Foundation Playwright in Residence at Theater Mu, a Jerome Hill Artist Fellow in Theater, a McKnight Foundation Fellow in Community-Engaged Practice Art, and a member of the City of Saint Paul Cultural STAR Board.

A self-described “creative documentarian,” Vongsay has worked diligently to expand her knowledge, talents, influence, and reach, by pursuing the artistic disciplines and subjects closest to her heart.

Jai Khang (Heart Hard) is how she describes herself in Lao, a characterization that feels true to the expanse of Vongsay’s life experience, and her determination to share stories of the Laotian diaspora from a Lao/Lao American perspective. 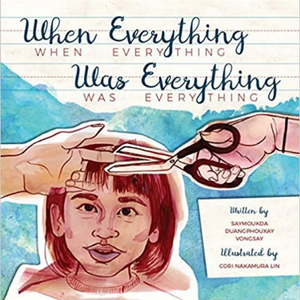 Born in a refugee camp in Nongkhai, Thailand, Vongsay immigrated to Minnesota in 1984. She received a BA in English in 2005 from the University of Minnesota, Morris, and a Master of Liberal Studies (MLS)* from the College of Continuing and Professional Studies (CCAPS) in 2017. Six years in the making, her thesis was a collection of poems exploring “refugee identity formations, trauma from the Secret War in Laos, mental health, and relationships.” The following year, When Everything Was Everything was published.

Since that time, Vongsay has worked nonstop, both creatively and in the community, which in her case, are truly one and the same.

In 2019, Vongsay received a prestigious Sally Award from the Ordway Center for Performing Arts. The award “recognizes bold new steps and strategic leadership undertaken by an individual... in creating projects or artistic programs never before seen in Minnesota that will have a significant impact on strengthening Minnesota’s artistic/cultural community.”

And this past April, the University invited her to speak about her work during its Alumni Association Annual Celebration. Marking its 118th year, the event highlights how alumni embody the outcome of the University’s teaching mission—”strengthening and leading their communities every day, in every industry.”

As an artist, as a leader in the community, Vongsay shows no signs of slowing down. If 2022 is any indication, she’s ramping up as her national exposure and commitments continue to grow.

And then there’s the Bush Fellowship, through which Fellows “pursue education and learning experiences that help them develop the skills and relationships to foster large-scale change in their communities and region.”

“It feels like a different kind of recognition,” Vongsay noted in MinnPost. “It’s one thing to get a grant for a project, it’s another thing to get a fellowship that will allow you to really be bold with the work that you do.”

CCAPS: Congratulations on receiving a 2022 Bush Foundation Leadership Fellowship. In your statement, you point to the tremendous impact theater has on the perceptions of people and communities. Could you speak more specifically about the power of theater to influence human perception—both individually and collectively?

SDV: For the Lao, it's common for folks to gather and watch a story unfold, sometimes told by their own family members, sometimes by local village talents, and sometimes by traveling professional troupes. Historically, theater was primarily for the elite, the royal court, and told religious stories. As time went on, theater became more accessible to the everyday person, and stories became less about relaying religious "how-to's" and more about what the everyday person experienced. The more powerful pieces of theater are usually the ones that mirror current events or historical events; they ask hard questions, and make the difficult stuff easier to access.

CCAPS: One of your goals is to “shine a spotlight on Laotian stories and create opportunities for Laotian artists to be disruptors, interrogators, documentarians, instigators and imagineers in the Lao American Theater Movement.”  How does your work with the podcast The Collective Perspective: Reclaiming and Reshaping Theatre feed into these goals?

SDV: Yes. Laotian Americans have not historically been part of American theater. We can't even count on one hand the number of Laotian-centered stories that are WRITTEN BY LAOTIANS that have been produced in this country, and that's a major disconnect for me, considering our communities have been in this country for over four decades. As much as we, theater-makers, love our community/craft, we also have very valid criticisms of American theater. The podcast was created as a safer space for us to speak on it all on our own terms.

Laotian Americans have not historically been part of American theater. We can't even count on one hand the number of Laotian-centered stories that are WRITTEN BY LAOTIANS that have been produced in this country, and that's a major disconnect for me...

I initially joined the Collective Perspective team because I had things to say about American theater, my participation in it, and my love for theater-making and other theater-makers. However, I had to bow out. My playwriting work was picking up and I felt I wouldn't be able to participate and contribute as fully as I would have liked.

CCAPS: Your attention seems keen in that it is simultaneously expansive and more narrowly focused. For example, Writing Love Letters to Ourselves—your workshop related, in part, to conversations about American beauty standards and how they impact women of color. Can you talk about how this workshop and similar activities may also feed into your goals?

SDV: People have asked me if I'm afraid of being a "Jack of all trades and master of none," and I say, "Not really." I think it's great that I have all the tools in front of me to use. Whether it's poetry, prose, installation, performance art, a play, or a musical, I'm going to use all the ways that will allow greater access to the stories I want to tell the world. Some people aren't into reading poetry, but they will go see a play about zombies and cannibals. Some folks won't step foot into a museum, but they love spoken word poetry and open mics at coffee shops. I think art participation should be accessible to all people. Although my plays and poetry and picture book center on the Laotian diasporic experience, ultimately it is for everyone.

People have asked me if I'm afraid of being a "Jack of all trades and master of none," and I say, "Not really." I think it's great that I have all the tools in front of me to use.

CCAPS: After earning your BA in English, you earned your MLS. Why did you choose to attend graduate school?

SDV: Before I returned to the University for my Master's, I actually applied to the MFA in creative writing program at Mankato State! I was rejected—twice. The MLS program presented itself to me when I felt like the universe was telling me to stop pursuing the “writer’s path” and I almost listened. I learned about the MLS program through attending a writing workshop for women of color cofacilitated by my friend Sherry Quan Lee [MFA '96] and MLS student Lori Young-Williams [MLS '11]. Lori explained that she was able to design her own learning path and that it was interdisciplinary and that she was encouraged to take courses from other graduate programs. I immediately saw great value in the resources available to MLS students. I submitted an application at the next deadline.

CCAPS: Are there aspects of your MLS education that you use and/or continue to build on in your community outreach and leadership work? Your artistic practice?

SDV: Yes, absolutely! I focused on courses that would allow me to work in multiple sectors: the arts, philanthropy, and policy work. These babies often intersect. To this day I use what I've learned to be an artist on the City of Saint Paul Cultural STAR Board. We are charged with allocating grants and loans to organizations for capital improvement, special projects, and organizational development—all to increase and sustain arts and culture in our beautiful city.

CCAPS: Who from your time in CCAPS was most influential and why?

SDV: Cindy Gehrig was one of my instructors and in the early stages of research for my thesis, was an advisor. I looked up to her. She was (and continues to be) a champion of the arts, arts participation, and philanthropy. For a long time I wanted to work at an arts-focused foundation because of her—but through her, understood that I can do both, be an active artist and advocate for artists by working in tandem with foundations (which is what I've been doing for the last 4–5 years), for example, to design more equitable funding programs. She taught me how to be a better communicator/grant writer and advocate for the causes/projects I care about.

For a long time I wanted to work at an arts-focused foundation because of her—but through her, understood that I can do both, be an active artist and advocate for artists by working in tandem with foundations.

CCAPS: I understand that you and your family are members of Building More Philanthropy with Purpose (MMPP), a multigenerational giving circle. The group’s vision seems so well aligned with your personal and professional work. What can you share about the circle’s mission and activities?

SDV: I love BMPP. I've been a BMPP grantee and have helped a handful of artists submit their proposals. Thanks to my newfound success as a playwright, our family was able to give back to our community by becoming a giving family. What's unique about BMPP is that we are super chill! We do our best to create a more accessible process, we don't require a formal final report, and we don't monitor our grantees. The most important part, we are deeply ingrained in our communities and have a long-term investment (as individuals) to many of the projects/groups we've funded. Some of us have become mentors, patrons, volunteers, donors, audience members, and supporters of our grantees.

*The Master of Liberal Studies degree was offered by CCAPS for many years and has a robust group of successful alumni that the College continues to celebrate. To continue to meet the evolving needs of our learners, the MLS degree was discontinued and its ethos of providing interdisciplinary focus areas, an individualized applied final project, and positive community impact continues with the MPS in Civic Engagement.

Vongsay shares her family's story through her poem, When Everything Was Everything, via the Immigration History Research Center