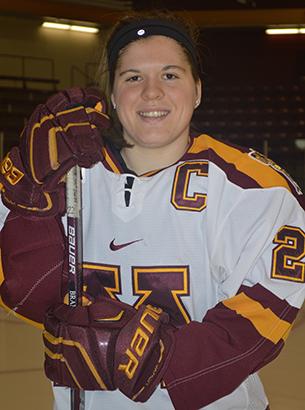 “Growing up, hockey was just something fun to do. I guess it was in high school that I realized I might be able to go somewhere with this,” says Hannah Brandt, former co-captain of the U of M Golden Gophers Women’s Ice Hockey team.

That “somewhere,” it turns out, could be Pyeongchang, South Korea, for the 2018 Winter Olympics to represent the U.S. in women’s hockey.

Brandt, like many student athletes, is rather humble when she talks about herself. Her Olympic dreams and many goals, both on the ice and in the classroom, are mentioned with nonchalant composure. But do not be mistaken—Brandt has a lot to be proud of. She’s a world-class champion hockey player, and she’s also a driven student who wrapped up her degree as an Inter-College Program major with a focus in Health and Wellness. When she was in school, her typical week demanded 40 hours of schoolwork and at least 20 hours of ice time, training, or playing games. Meanwhile, there have always been those five multicolored Olympic rings beckoning on the horizon.

“I don’t know what’s going to happen in my future,” Brandt says. “I'm putting off grad school [to be a PA] till I’m done playing hockey. That could be two years, four years, six years… it’s not set in stone.”

Since graduation in the spring of 2016, Brandt has been training for the 2018 Winter Olympics and playing for professional women's ice hockey team, the Minnesota Whitecaps. This way, she’ll be able to stay fit in the sport so she’s ready for the U.S. Olympic tryouts in the summer of 2017. If she makes the team, there’s another exciting possibility: she could be playing against her sister at the games.

“My sister Marissa is adopted from South Korea. Hockey is a big part of her life, too. She was contacted last year [2015] and asked to attend a training camp in South Korea to potentially play for the women’s Olympic ice hockey team there,” Brandt says. “I’m really excited for her. If it works out that we both go to the Olympics, that would be pretty awesome for our family. I just have to hold up my end and make the U.S. team.”

Brandt says she chose to pursue a degree in the Inter-College Program because she had the opportunity to customize her degree to fit her interests, and she was able to take classes all over campus, in different departments. As one might expect, her interests lie in staying healthy and fit. So an ICP degree in Health and Wellness was an obvious choice for Brandt, who plans to go on to grad school to one day become a physician’s assistant.

All that, of course, will wait until after she’s retired her skates. 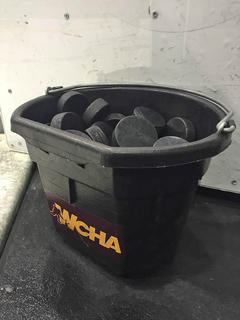 Brandt's Accolades on the Ice

During her time at the U of M, Brandt was a co-captain of the Golden Gophers Women’s Ice Hockey team. Her position is forward. A few of her honors include being named WCHA Player of the Year (2013−14 and 2014−15), making it as a top-three finalist for the Patty Kazmaier Memorial Award (2013−14 and 2014−15), earning recognition as the NCAA Frozen Four Most Outstanding Player in 2014−15, and, most recently, winning the Big Ten Medal of Honor for Minnesota in March of 2016.

Besides these accolades, Brandt has played for the U.S. National Team. She won gold with Team USA at the 2015 IIHF Women's World Championship in Malmo, Sweden, after taking home silver with the 2012 world championship team at the age of 19. As a member of the U.S. Women’s National Under-18 Team, she won gold at the 2011 Under-18 World Championship. Brandt was the recipient of the 2012 Minnesota Ms. Hockey Award while playing for Hill-Murray High School as well. In March of 2016, the Golden Gopher's Women's Ice Hockey team won the NCAA championship. 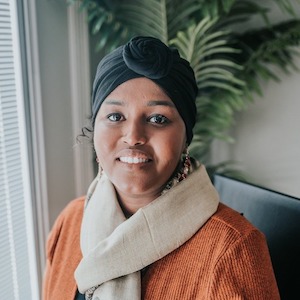