Master of Professional Studies in Addictions Counseling
By Mia Boos

Ronn Olson, like many who come to addictions counseling, sampled a variety of fields and found that none seemed to fulfill him quite like the health services. 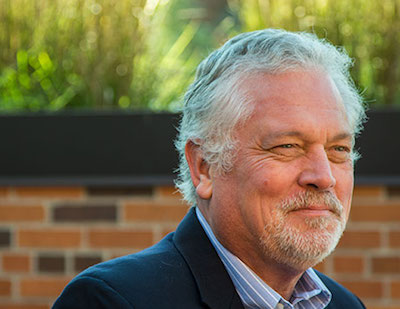 Olson started out as a philosophy student as an undergraduate, then switched to humanities, before settling into biology and pre-med. But he didn’t go into health care at that point: he took a longer route, first by being a medical salesman, then a supervisor of investigations for a security company, before setting up his own photography studio.

“I’ve always been in sales or photography, and they actually overlap,” he says. “The required skills are similar: you need good listening skills, empathy, and psychology to deal with people, to get them to feel comfortable.”

For over 10 years Olson worked for Lifetouch, a school portrait photography company, while maintaining his own studio, Small Fry Photography, which he ran for over 15 years. But after memorializing over 1,000 weddings and countless preschoolers, he knew it was time to channel his natural ability to connect with people in a new direction.

“I really questioned whether or not I would be able to do it,” he recalls about applying to the Master of Professional Studies in Addictions Counseling. His first class was online, which didn't even exist the last time he was a student.

“It was a challenge, but I really enjoyed it. The more I studied and learned, the happier I was with the whole program and the more excited I got.”

During that first semester, after a total hardware and software upgrade, he felt like he was not only learning the course content, but also “a bunch of other things that other students already knew,” he says with a smile.

The Heart of the Matter

We all know someone who has been affected by addiction. Olson witnessed firsthand the distress often caused by addiction and decided he wanted to give back, to be of service to those suffering.

“The program is evidence-based,” he says, “so it really gets into the details of addiction, things I haven't even thought of before… I didn't know that group therapy has been shown to be just as, if not more, effective than individual therapy, because people learn from each other. They don't feel so alone.”

Olson took those insights out into the treatment community, where he visited three different facilities to observe their operations. These field trips got him thinking about issues like the incidence of co-occurrence, implementing an integrated approach into practice, and even how to treat chronic pain.

“The field is evolving so much from the old model of confrontation and denial."

“Now we talk about a person-centered approach where we help people recognize their own internal motivations and see that change is really their own idea, because people generally listen to their own opinions first.”

Olson hopes to obtain his LADC and become a counselor as soon as he can after he completes his internships next spring. He also plans on taking additional courses after he graduates and perhaps even pursue the MPS in Integrated Behavioral Health down the road.

“Part of my motivation is to set a good example for my kids and my family, to show them it's never too late.”

Olson has three grown children: a daughter who works for St. Louis Park public schools as a social worker; a son who is a philosophy professor at Cal State; and another son who works at the Walker Art Center.

His grandfather was a doctor in a small town in Iowa, and it’s clear that the family tradition of serving the public has come full circle.