When Inter-College Program (ICP) student Bemnet Kika first began working on a group project in the Grand Challenge Curriculum course, Innovation for the Public Good, she didn’t really know what to expect. What she discovered was an opportunity to raise awareness around environmental racism across the river from where she lived, in the East Phillips neighborhood of Minneapolis.

The Phillips neighborhood had been exposed to toxic pollution from pesticide facilities, recycling sites, garbage incinerators, and traffic from busy nearby streets for years. Even after some of these facilities closed, the effects lingered; the area has some of the highest rates of asthma and lead poisoning in the state.

“The idea of using the cemetery as a green space came up during community interviews,” Bemnet says, “which was really interesting to us. We worked closely with Susan Hunter Weir, who is one of the leaders of the Pioneers and Soldiers Cemetery. She allowed us to come into her space and plant some trees.”

The group learned that the Pioneers and Soldiers Memorial Cemetery, located at the corner of Lake Street and Cedar Avenue, had actually been used as a public space for years. The last body was buried there in 2001, and since then it has hosted concerts and movie showings.

“They're very active within the community already,” Bemnet continues, “and so, because of that, we felt comfortable to go into the cemetery space. We even added a couple of benches in hopes of attracting more people to not only come into the space, but stay in the space.”

The team submitted their project, the Open Spaces and Healing Initiative, to the University of Minnesota Acara Challenge in 2021 and won a $2,000 fellowship to bring their ideas to life. Their goal is to increase the number of green spaces in urban areas to improve air quality, provide places to relax and escape excessive heat, enhance accessibility and social interaction, and support physical activity.

“If you have an idea, and if you can get some form of support, whether it's one person or two people, you can really take that idea and create something real and meaningful. I think that's what I took away from it.” 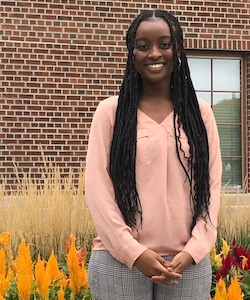 Bemnet is headed back to the classroom this fall and is looking forward to taking the Open Spaces and Healing Initiative a step further. With their connections to community leaders, the team hopes to continue to revitalize green spaces as a way to fight environmental racism and promote community healing. Open Spaces still has a little bit of money left from the Acara Fellowship and is now discussing the best ways to spend it.

“We're debating if we want to continue working with the cemetery and adding things like QR codes to really show the history of the cemetery... Or if we want to branch out more into the Minneapolis community and go to other cemeteries or address air pollution in other ways.”

“Before the pandemic I was on a pre-physician assistant route,” she says. “And when the pandemic came, it was scary to go into hospitals, so I turned down a job. That really allowed me to take more time to think about what I wanted to do... and I ended up deciding to completely switch my major and take a different route.” 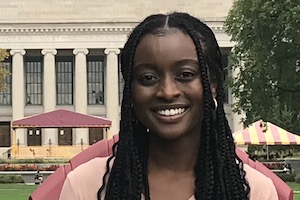 That route led her to the Inter-College Program, where she was able to combine her interests in health services management and public health into one unique major.

Bemnet currently works as a caregiver with Geneva Suites, an assisted living facility. This summer she completed an internship with Allina in their Courage Kenny Rehabilitation Center. “It’s exciting because a lot of my (Geneva) residents actually go to Courage and it intersects with my current job as a caregiver.”

She may take a year or two off to work in the health care industry and gain some experience, but she hasn’t ruled out graduate school.

“My goal,” she says, is “to create a positive impact on marginalized communities who have historically been hurt by the health care industry. Whether that's through a management position in a hospital or whether that's through some other way that I find down the road, I'm really open to options.”

“Talk to your advisor and friends and family if you feel like a regular major may feel too constricting. Because I'm someone who has a lot of interests in a lot of different areas, and I think that's what the degree allows you to (study).”

What Is the ICP Program Proposal?

For many prospective ICP students, the idea of creating their own major seems overwhelming. How can that even be done? How do you narrow down what you want to study? Bemnet helped us break it down.

“You actually take a course called the Inter-College Program Proposal Development. They have you work with the teacher and your advisor. And the whole semester you spend preparing and writing this proposal that you submit at the end of the semester.”

The proposal consists of three sections: The first one focuses on what you hope to achieve and how you got introduced to the program. The second section asks about your background and your interests. The last section outlines the specific courses you want to take to fulfill the major requirements.