Surviving and Singing through the Pandemic

“When the pandemic hit, you know, it was kind of a stop-in-your-tracks type of moment for a lot of people, but it affected me as an artist, of course,” says MPS in Arts and Cultural Leadership student and professional singer Kristina Rodel Sorum.

“A lot of gigs were cancelled,” she continues. “Performing was kind of on hiatus and even my day job at a summer music camp was cancelled, so everything just really slowed down.”

Kristina had been considering graduate school for a while as a way to broaden her career options, and the pandemic allowed her time to reflect. “I knew I wanted to keep working. I discovered this program and thought, this could be a really perfect fit for what I'm trying to do with my life.”

“Major in something practical.” 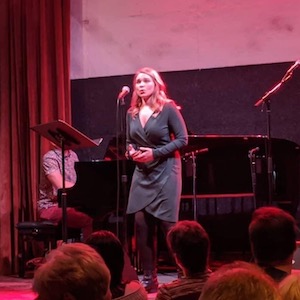 Kristina was aware of the cliched warnings about majoring in music and voice performance as an undergraduate. But luckily, she didn’t pay attention to them.

“I use it every day,” she says of her vocal gift. “I’ve never regretted doing that degree, and I love my parallel life as a professional singer.”

She has been passionate about singing her whole life but didn’t think of singing as a profession right away. She went through phases, as most young people do, playing the trumpet for a while and dabbling in musical theater.

But then as a senior in high school she saw her first opera, The Marriage of Figaro. “It just blew my mind,” she recalls. “I didn't think that normal people could do that. So I just took a really hard left turn and decided that's what I wanted to do.”

In her final year in college at the University of Minnesota, Kristina sang one of the principal roles in The Marriage of Figaro in what she calls “the perfect full circle moment.”

Today, she sings with nationally renowned group VocalEssence. She is also a soloist at her church and performs at numerous festivals and as a soloist around the Twin Cities.

Prepared for the Next Challenge 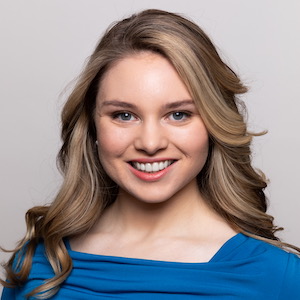 Even though Kristina wasn't performing regularly in the traditional sense during the pandemic, she still managed to sing quite a bit. She sang in a virtual recital series and continues to work with her voice coach. She also made weekly recordings for her church and collaborated virtually with colleagues from around the country.

She also took advantage of the unplanned break to boost her professional skills. The ACL program, she says, has helped her become a better leader and prepared her for a new job in fundraising. “I found that my grad school classes have actually helped me get a grip on what it would look like to go into that field and given me the information and the confidence that I needed to pursue that.”

Kristina started a new position as the individual giving manager at The Guthrie Theater this past January. She says she even used many of the skills gained in the program during the application and interview process.

“I don't think that I would have come this far without being in all these classes and meeting these people.”

The ACL Course that Surprised Her

"I've never been a numbers person. I've never considered myself somebody who could be fluent in that, but I loved that class. She made it so accessible, fun, and real. We were looking at actual, living organizations, digging up their 990s. Every class was basically a scavenger hunt to look at the numbers and figure out the story that they're telling.

"And that has just been so helpful to me, not only in my organization, but when I'm doing research on other organizations or preparing for job interviews or things like that. You can learn so much with the information that's publicly available.

"You can just really wow people by being able to read a balance sheet. The most unexpected and wonderful surprise was how much I loved that class and how much I use it.”

"It's okay to not have it figured out. You don't have to come with a five-step plan. But be ready to participate. A lot. Let go of any self-consciousness about sharing your ideas or experiences or asking questions. The sooner you can get into the cohort mindset of not only learning from the text and the professors, but also from your peers and giving them the opportunity to learn from you… the sooner it's gonna pay off.”

“I don't think that I would have come this far without being in all these classes and meeting these people.”

"I thought that there would be more people like me, and I love that there are not. Not everyone is from the United States, not everyone is bearing the same cultural experiences. It's just been really amazing to challenge everything I know in that way and bear witness to all these people learning more about themselves and changing career paths and feeding that ecosystem.”