Turning a Negative into a Positive

Master of Professional Studies in Addictions Counseling
By Mia Boos

You won’t be able to stump Melissa Grant with a question about Cervantes, the Constitution, or Plato. With an undergraduate degree in Spanish Literature and a law degree, her knowledge spans both ancient texts and landmark Supreme Court decisions. She also studied for an advanced degree in philosophy.

But the one question she can’t answer is the one that defines her future career: What treatment method will work best for my client? That’s the question only her clients themselves can answer.

And Grant should know. She attended four different treatment programs before finding sobriety.

“’I'm Melissa, and I am an alcoholic.’ It took me a very long time to admit that was true,” she says. “This might sound like I’m bragging but I don’t mean to—counselors and other people in treatment told me lots of times that I should go into addiction counseling because I had a talent for helping others out.”

Now as an MPS in Addictions Counseling student, Grant is one step closer to becoming a licensed drug and alcohol counselor. “I love school. If I could afford it, I’d probably keep studying into my 90s.”

“I’m very excited to turn a negative into a positive and use my experience with alcoholism to benefit others,” Grant says. “I speak fluent Spanish, and that’s something else I have to offer.”

Grant has shown that her dedication to helping people extends beyond those struggling with a substance use disorder or mental health issue.

“In 2005 my husband and I had three kids,” she says. “We decided to adopt an 11-year-old boy. When we were going through the process, the birth mother got pregnant again, so now we were adopting two kids. There was also a 3-year-old boy who was being adopted by a different family, but they ticked off the adoption agency, so they gave us the little guy.”

"When waiting for someone with an addiction to recover, exceptional patience may be required.”

Her family of five suddenly became a party of eight. “So suddenly I was working, volunteering as a pro bono lawyer, studying, and trying to parent six kids. Now I’m just used to the chaos.”

She adds that two of the children they adopted had reactive attachment disorder, which is where a child will not accept their new parent.

“I had to learn that healing takes time, sometimes even years,” she says. “Similarly, when waiting for someone with an addiction to recover, exceptional patience may be required.” 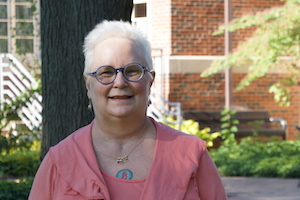 “The best class I took was Motivational Counseling. It helped me understand how important it is to meet the client where (they) are at, not where you wish they were. I also learned how to frame information so that people who are normally unwilling to listen or talk about addiction will be open to it, and will hear the message I have to offer.”

“Debra Wamsley was my favorite professor. I took two classes from her. She makes you feel like you’re the only one in the room when she talks to you in class. She is very respectful and tries to help any student get over any hurdle that stands in their way. Plus, she knows her stuff—she has real expertise in addiction counseling.”

“The required classes are just as interesting as the electives. Look forward to each new class, and you won’t be disappointed.”