Catching Up with Lucas Erickson (ACL ‘18)

Master of Professional Studies in Arts and Cultural Leadership (ACL) alumnus Lucas Erickson launched his unique theater outreach program, On Stage, while he was still a graduate student. Through scene reading and guided discussions, the On Stage team of actors and educators bring plays to life in college classes and community settings.

Working off a play’s script, the group will tie together universal themes, current events, and personal stories in the hopes of creating a greater understanding of the play and of the human condition.

But the goal, Lucas says, is not only to get students to see the play but to enrich the learning experience, foster relationships, and broaden perspectives—his own included. “We're real people talking about real things,” he says. “It’s not a marketing program.” 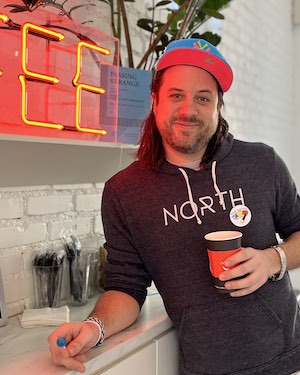 Before he brings a play into a class, Lucas meets with an advisory committee of educators to talk about the plays that local theater companies are or will be producing. They read the scripts and decide which ones could yield good discussions, then how to frame the discussions based on the class they’re visiting. They’ll choose which themes to focus on and plan games and activities that align with those themes.

For instance, the play they recently featured was Man of God, about a pastor who takes four Korean American students to Thailand and plants a hidden camera in their bathroom. The playwright gives the girls their power back through elaborate revenge fantasies. In the class, students talked about power dynamics, trust, and vengeance.

“We handle these topics with the utmost respect and care and sensitivity,” Lucas says. “I think if I was working for a theater company it would feel much different, but since I’m not affiliated with one, it’s more about, we just want to have this conversation because that's really what we want to do.”

With the culinary arts departments of Hennepin Technical College and St. Paul College, On Stage took that same play and asked students to create a dish based on the theme: Revenge is a dish best served cold. For “Aubergine,” a story about a son cooking a childhood meal for his dying father, students prepared a dish that was important to them or their culture.

“I think I've always been a connector and that's what my program allows me to do.”

“We want to go into the departments where there isn't really a (performing) arts element,” he says. “So we go into English, creative writing, literature, communications, sociology, law, and political science classes. We get scientists out of their lab groups to talk to people that they probably haven't talked to before.”

He typically acts as the moderator of the event, setting the tone, making timely jokes, and engaging with the students, but he has also learned how to facilitate the discussion.

“The first few times I did it I felt like I had to memorize what I wanted to say, and then something clicked with just how important it is to be in the room and present.”

Act II: How It Started 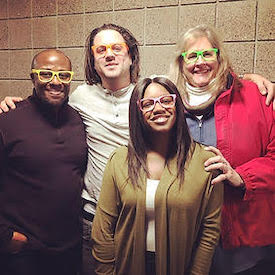 Lucas took courses in lighting, sound, and set design, but he really fell in love with arts education during his Arts and Cultural Leadership internship at the Guthrie Theater. There, he did several residencies at high schools and visited hospitals and different organizations. They were bringing the plays to the people, instead of asking them to come to the theater. Lucas wanted to foster that accessibility and inclusivity to college students through On Stage.

“At the time I didn't really know a whole lot about the Twin Cities theater scene,” he says, “so I had to use my arts and cultural leadership skills to go and talk to people and put my nose in.”

But it was a critical literacy course with Maria Asp that really changed his outlook. It focused on how to teach stories to children within the context of who wrote it and when it was written, and then to question the author’s choices: Why was this character white? What if it was a woman? If you were to write this story, what would happen next?

That kind of thinking led to a transformation of what On Stage was doing in the classroom. Discussions and activities began to dive more deeply into the social, political, and cultural issues within the play. Connecting what was happening in the fictional world to students’ day-to-day lives and current events made the plays more relatable. 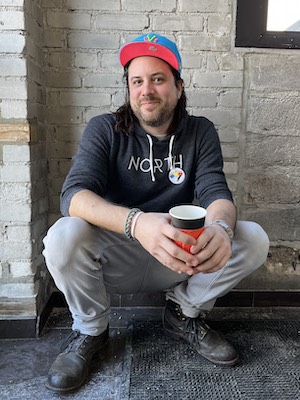 “I just knew that adding that three-dimensional element of the real world to learning would really make it click more,” Lucas says. He now has the students, not the actors, read the scenes, allowing them to take ownership of a role, regardless of what age, race, or gender the character actually is.

“We're really just trying to break through with something meaningful, create little cracks in their learning, a little disruption in what they have normally been taught and have them think a little differently.”

Lucas also wants to make sure On Stage highlights theater companies that may not have education departments or large budgets for outreach. Twenty-three plays, five years, and eleven different theater companies later, there are still organizations he hasn’t worked with.

“I think I've always been a connector and that's what my program allows me to do,” he says. “I want to give everyone a chance for us to talk to students about their show.”

In April 2022, On Stage discussed “Passing Strange,” coproduced by New Dawn Theatre and Yellow Tree Theatre. With the book and lyrics by performance artist Stew, this rock musical tells the story of a young African American man’s artistic journey of self discovery. “Passing Strange” won a Tony Award for Best Book of a Musical in 2008 and three Drama Desk Awards.

Take your time. “I took my time. I just made so many great connections with people.” For example, he met Maria Asp through her critical literacy class. She became a friend, colleague, and one of On Stage’s main teaching artists. She connected him to Wendy Knox, artistic director of Frank Theater, where Lucas is now the board chair.

Engage yourself in your community. “Get out there, go! Go to those bars, restaurants, and stores around the campus and learn about the community. I was on the board of the Cedar Cultural Center for a year, and now I feel so much more connected to that area and not just the school.

Read an interview with Lucas Erickson from 2016.