After 11 years working in the security division of Target Corp., Ted Weidenbach was ready for a change. He’d started working at Target right out of college, nimbly transitioning into new positions within the company, and eventually he earned a position as Lead Business Partner. It was a good job and one that he enjoyed, but Weidenbach felt he was on a professional plateau. However, there was one segment of his daily work that sparked Weidenbach’s interest to pursue a new professional path, and that segment had to do with training employees. 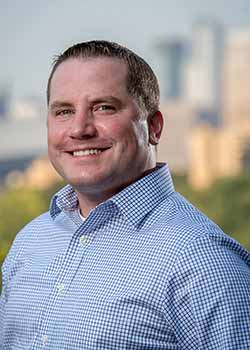 A significant part of Weidenbach’s responsibilities included training activities. Using Target’s training tools, Weidenbach led his team through e-learning modules, classroom facilitation, and more. It was this intricate web of training that fascinated him. By 2015, he knew he wanted to make a major shift in his career and work full-time in adult learning and development at Target, creating the training content himself and deciding how best to implement it.

“I was captivated by the question, How do you make people even better at their jobs?” Weidenbach says. “I decided to go into this field because I want to make people’s lives more fulfilling.”

As a husband with a young family, though, Weidenbach knew he didn’t want to disrupt life too much by having to start a new career from scratch. Instead, he chose to bridge the knowledge gap by getting a mentor, joining a networking group, and enrolling in a Professional Development Certificate Program at the University of Minnesota’s College of Continuing and Professional Studies. The Professional Train-the-Trainer Certificate program promised to equip him with the latest tools and knowledge for needs assessment, curriculum design, delivery, and measurement.

“I can wholeheartedly say that the U of M’s Professional Train-the-Trainer Certificate program gave me a great base knowledge to make this career change, and it also showed that I was serious. It fed my curiosity to try something new and become an expert.”

In the spring of 2016, Weidenbach began the first of five courses required to complete the Professional Train-the-Trainer Certificate, all taught by professionals working successfully in the field.

“After the first course, I knew I was making the right decision,” Weidenbach says. “It gave me this I’m-gonna-tackle-the-world mentality. After every one of my courses, I walked out of the classroom feeling armed with knowledge, ready to immediately implement things.”

When All the Hard Work Pays Off

Weidenbach had completed four of the five courses by the time he noticed a new job opening at Target for a Senior Business Partner of Learning and Development. It was just the position that he was striving for. Even though he wasn’t finished with his certificate yet, Weidenbach knew he had to apply to the posting. His application led to an interview.

“In the interview, I referenced the U of M’s Professional Train-the-Trainer Certificate program and the things that I’ve learned so far,” Weidenbach says. “The people who interviewed me saw that I had the necessary baseline knowledge and that I was willing to do extra work to get to where I wanted to go.”

In May of 2017, Weidenbach got the job. With only a few months under his belt in the new position, there’s plenty to keep him engaged at work, learning things daily. It’s just what he wanted for his career—an ambitious leap and a successful landing, followed by a whole new field to explore.

“I can wholeheartedly say that the U of M’s Professional Train-the-Trainer Certificate program gave me a great base knowledge to make this career change, and it also showed that I was serious. It fed my curiosity to try something new and become an expert,” Weidenbach says.

Reflecting on his journey to arrive where he is today, Weidenbach says that he would encourage any other professional who’s looking for a promotion or career change to pursue further education. “Absolutely do not hesitate to do it, to get any certificate for that matter,” he says. “You own your development. You own your happiness. Everything you want in a job, you own. And if you want to get better at something, or you want to learn a new skill, getting a certificate is the perfect way to bridge the gap. I was very satisfied with the program I took. I learned everything I wanted to. A certificate is a great introductory step.”