Seeing the Big Picture through a Local Lens

Master of Professional Studies in Civic Engagement
By Mia Boos

Mikayla Frey’s passion lies in studying the power of local governments and “how they really interact with their constituents.”

“What I’m really interested in is public diplomacy outreach,” the MPS in Civic Engagement student says. And “local government is one of the areas that affects us most.” Yet local elections and debates are the least likely to be attended. 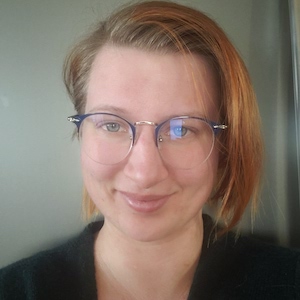 As an undergraduate, Mikayla majored in global studies with a minor in Chinese. “On a whim,” she took a graduate-level course on research and became instantly fascinated.

“I kind of fell in love with the research aspect,” she says. ”I love finding weird answers to questions.” Which may not explain why she was drawn to civic engagement but does explain why she chose the Self-Designed Track.

She wants to explore what can and should be done to help get people more engaged with their local governments and with voting. “Because for the vast majority of everybody's daily lives,” she explains, “federal and even state policies to a large extent don't really affect us in the ways that we think they do.”

It’s the local issues that have the most direct impact on constituents, but “they're the elections that people are the least likely to vote in.”

So how do we get more people involved in local government?

“There needs to be more efforts around awareness,” Mikayla says. “Most people don't know when their public elections are and then when they do very few people know what, say, a water commissioner does or why candidate X would be better than candidate Y.

“Get to people who can help spread your message.”

She thinks information sessions would be helpful. Or towns and communities that have colleges could set up booths. Even getting the word out to high school students could be useful. Mikayla worked with 4H students (in Extension at the University of Minnesota) and understands the power of youth movements, even in a population that is too young to vote.

“You can work with and engage high school students so that they can go tell their parents,” she says. “Get to people who can help spread your message.”

To help spread those messages more effectively, Mikayla’s dream job would be to either work for the State Department or an embassy in either research or public diplomacy. But she is keeping her options open, including pursuing a doctoral degree. 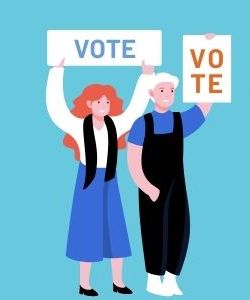 Like many of our graduate students, Mikayla worked full-time while attending school. After her role in the Extension office at the U of M, she became a compliance analyst at IFG (International Financial Group). To manage her workload she takes one or two classes per semester.

“Part of why I really like (the program) is because it has a lot of online courses, and the courses that are in person are usually evening classes. So it's really easy to balance around work, as far as assignments and workloads and things like that.”

How does she stay organized? “I've just been really living on my Google calendar,” she says. “At the start of every semester I'll take literally every assignment that's in the syllabus for any of the classes I'm taking and put them all in one place.”

Mikayla recommends planning ahead, especially for online classes, where you can see the readings and assignments ahead of time.

OLPD 5501 – Principles and Methods of Evaluation, with Stuart Yeh

“I think when you're talking about civic engagement there are some things that can follow a more traditional research path, but a lot of times that's not necessarily what people want, per se. Even with these public diplomacy efforts, they're not necessarily wanting research, they're wanting an evaluation of whether it’s a good use of their time.

"And so the course really takes you all the way through proposing good evaluations to running them yourself. I think it's been really interesting to look at the differences between evaluation and research and how they fit together and how they're different.”

If you’re considering applying to the Civic Engagement program...

Mikayla is a recipient of a Ceil T. Victor Scholarship.