The personality traits that initially drew this year’s student commencement speaker Derek Vang to the sciences proved to be the same ones that carried him through his graduate program: an irrepressible curiosity and determination.

“The sciences aren’t perfect,” he says. “You’re always looking for answers, and even when you think you’re coming to an answer you’re always left scratching your head, thinking that there is something else. That is the challenge.”

A few years ago, Vang was learning the ropes at a new job at the Veterans Administration Medical Center and enjoying his first year in the Master of Biological Sciences program. Then he and his wife learned that they were unexpectedly pregnant—with twins. They arrived during finals week. 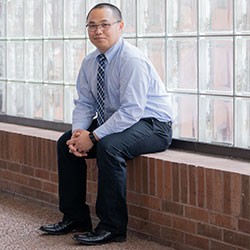 “I was literally on the ground in my wife’s hospital room, writing and studying for exams,” he remembers. “But my wife did the majority of the work.”

The couple relied heavily on family, and Vang was also able to take some courses online. He also had the support of colleagues and supervisors who allowed him to take classes during the day.

Two years later, he and his wife welcomed a third child. With little sleep and “running on solar power,” he still completed his degree in three years. “I don’t drink coffee,” he adds.

Family was both his motivation and his means. He admits he could not have done it without a willing and generous network of relatives. “Prioritize what’s important to you,” he says. “It’s not just for you, it’s for your family and your children. Use that to drive you forward, not backward.”

Vang has a natural affinity for the sciences and studied biology as an undergraduate. He gained hands-on experience through an internship that reignited an interest in research. An opportunity arose in the U of M Medical School’s Vascular Biology Center that enabled him to concentrate on biology and neuroscience.

“It’s not just for you, it’s for your family and your children. Use that to drive you forward, not backward.”

Other students in the lab soon recognized that he was doing graduate-level work and suggested he look into pursuing an advanced degree. He found the Master of Biological Sciences.

Vang met with Brad Fruen, the MBS advisor, and together they chose coursework in neuroscience, pharmacology, and public health to round out his degree. His capstone project focused on finding a vaccine to combat opioid abuse.

“When I submitted my application for graduation and completed the capstone,” Vang says, “my wife was beyond happy, and that was worth it to me.”

Vang is still at the VA Medical Center as a research coordinator. One project he is currently working on is the Million Veteran Program, a research effort that, through collecting blood samples and data from one million veteran volunteers, studies how genes affect the health of veterans.

He is looking forward to applying his new skills and knowledge to improve other areas of research. “I like the never-ending search for answers, always looking for clues to better understand biology and life.”

“Don’t be afraid to ask for help. At this level, everyone is there to help: your professors, peers, colleagues, coworkers, family. Don’t make excuses. The program itself is designed to help everyone achieve their goals. The professors, advisors, and staff are all there to help.” 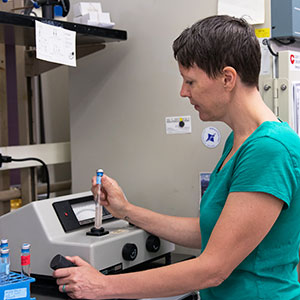 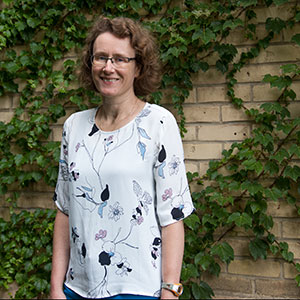 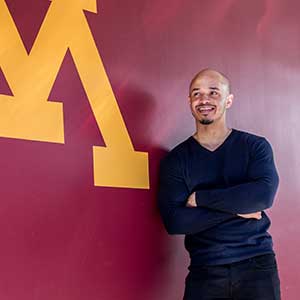