Building a Stronger Science Knowledge Base

Noah Kincs took his first microbiology course as an undergraduate in college. Unfortunately, it was the spring of his senior year. "Working with bacteria and things like that was really fascinating to me," he says, "and it was just unfortunate that I didn't get a chance to explore it a little bit further." 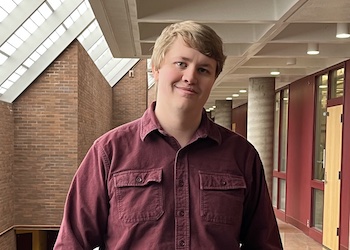 After graduation Noah ended up getting a job as a quality control technician screening for things like E. coli and salmonella. "That kind of ignited a love for microbiology, actually being able to work in that space and get a view of the industrial fermentation aspects of bacteriology and microbiology. "

Microbiology, he says, is an unseen world that has "massive impacts on a lot of different environments that we don't really appreciate, and that's kind of the most fascinating thing about it."

Noah was able to translate that quality control job into a research position within the same company, where he worked for several years. He was there when he started his Master of Biological Sciences (MBS) degree.

"I went back to school to get a better appreciation for some of the things that I was working on," Noah says, "mostly microbial physiology and molecular biology. I wanted to get a little more exposure to some of those more advanced topics, then parlay that information into applicable career skills."

Why He Chose the MBS Program

Customization. Noah didn't start out looking for a full master's degree. He had intended to only take a course or two, but then he came across the MBS program. "The thing that was really appealing to me about the program was the design-your-own-degree path."

Noah says that his field of industrial fermentation can involve a variety of disciplines. "You get aspects of microbiology and some chemical engineering… You even get into, depending on where you're working, animal nutrition and things like that." He appreciated the opportunity to take different classes "and build a more rigorous knowledge base."

"I wanted to get a little more exposure to some of those more advanced topics, then parlay that information into applicable career skills."

Flexibility. Noah knew a coworker (Sebhat Gebrechristo) who had earned his MBS while working full-time, so he knew the company was familiar with the program. He also saw that, with some creative scheduling and hard work, it could be done.

"It's been pretty valuable, being able to create that balance," Noah says. "It hasn't been easy, but it's definitely been a fun experience so far." 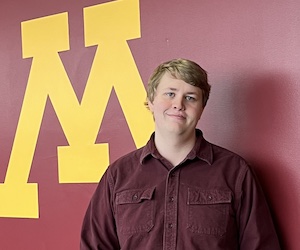 "I would say that the most important part is communicating expectations to everybody around you—professors, friends, family, and your employer especially." But, he says, it does take a certain level of maturity to be able to successfully set your own schedule. He recommends making time to spend on coursework alone on a regular basis, either every day or whatever works for you.

"Then also make time for yourself and make sure you don't get too overwhelmed, especially if you're working full time," Noah says. "I've had a semester where I've taken one class. I've had semesters where I've taken two classes, and I would just say definitely take it easy if you're just starting out. Don't try and take more than one class a semester while you're trying to work full time unless you know that you're comfortable with it."

What He Hopes Other Students Take Away from His Story

"It's definitely possible for somebody who's working full-time to build out a skill set from taking these classes. I was reading some of the MBS student stories of people who were working full-time, taking classes as either a career change or advancement, and they felt that it was a worthwhile investment. And that's kind of what I would try to communicate as well."

Prokaryotic Genetics with professors Katie Fixen and Jeff Gralnick
"That was the first course I took, and I really liked it because the entire course was taught from the lens of using the genetic toolbox to solve problems. That was a class that made a lot of sense because it was looking at a lot of applied scenarios and how you would use the tools or techniques that they're talking about in real-world applications. So, not only just going into the details behind something, but also how you'd use it to advance a goal or for problem solving."

Microbial Physiology and Diversity with professors Daniel Bond and Kyle Costa
"That was a difficult course, but it was really cool in terms of contextualizing the physiology of different microbes—specifically looking at some of the anaerobes and extremophiles that survive in some of the weirdest places on Earth and how they manage to have life in places that don't really seem like they should support life. So that, of course, is really cool. It's a little bit more advanced, but it's still really, really fascinating."