From Chemical Recycling to Collaboration

In 1969, an oil slick on the Cuyahoga River in Cleveland caught fire. The sludge, the result of years of industrial waste, burned for only 30 minutes, but its effects lasted for decades. The incident became symbolic of how far the nation had to go in terms of environmental health and safety. It contributed to the rise of environmentalism and to President Nixon starting the Environmental Protection Agency in 1970.

What Is Sustainable Chemistry?

For Romas Kazlauskas, it stirred a growing curiosity in the sciences and what would later become green or sustainable chemistry. Kazlauskas, the new Director of Graduate Studies for the Master of Biological Sciences, has devoted much of his research to the topic. 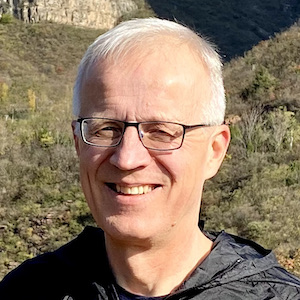 The purpose of sustainable chemistry, he says, is to not simply get rid of chemicals, “but to replace toxic chemicals with something friendlier, easier, and less dangerous” to the environment and humans. His current research focuses on replacing toxic reagents with an enzyme-catalyzed reaction that would eliminate waste and potentially the need for some organic solvents.

He describes the process this way: “When we use laundry detergent, all of it gets washed away. Some of what people have done to make soap greener is to add enzymes to it. The first ones added were proteases; they break down food, blood, and sweat stains to make them easier to wash away. So that eliminates the need to use as much soap. You’re washing away less soap and more enzymes, which are more biodegradable and less harmful to the environment. They possibly clean more effectively, so maybe you’re not using hot water, so you’re saving energy.”

With sustainable chemistry, he continues, you’re trying to catalyze some kind of reaction, and you often have to “fix” the enzyme. In the laundry detergent example, scientists had to alter the enzymes because they wouldn’t tolerate bleach at first.

“You’re taking an enzyme that does something out in nature, and you’re trying to get it to do something else, so you often have to engineer the enzyme to efficiently do this unnatural process.” 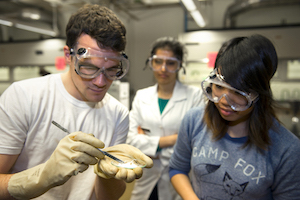 The cross-disciplinary collaboration that happens here is how real progress in the sciences is made. For example, Kazlauskas is currently working with a polymer expert in New York Rensselaer Polytech on developing an enzyme to break down plastics more efficiently.

“Right now if you recycle plastics, like in bottles and packaging, that plastic often gets recycled into something less valuable, like carpeting or a piece of clothing. It’s better than nothing, but it ends up in a landfill eventually.

"But with chemical recycling, we would use enzymes to break down these plastics into the molecules it started with. So you could resynthesize this plastic and it would be just as good as when you started. In principle, if it was efficient, you could do this forever. They’ve found some of these enzymes in nature, but they’re not very efficient. We’re trying to engineer them and match them with the plastic to work more efficiently.”

What Are You Excited about in the Sciences Today?

“We’re able to solve harder problems. Twenty years ago we would have never believed there would be an enzyme to break down plastic. It’s now becoming believable that I could probably get an enzyme to do whatever I want. Before we were limited to what we could find in nature.” 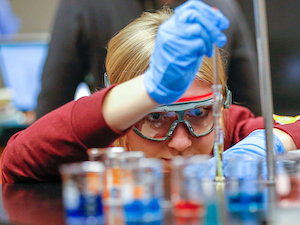 And, of course, there are still areas of science that he is unfamiliar with, and he welcomes those surprises and discoveries. “You have to have the confidence that if you really sat down and studied, that you could learn, that you would be able to do that.”

He looks forward to meeting MBS students and to finding out what brought them to the sciences, like the Cuyahoga River fire did for him years ago.

“I think it’s interesting how many different kinds of goals the students have,” he says. Some want to deepen their knowledge or have started working and realize they need to learn more about a subject, while others don’t have an extensive science background at all.

“It’s really fun to learn from them. They ask great questions that help me understand science better. Watching them mature into scientists is just great; I’m so proud of them.”

(In addition to being a professor (Protein Engineering), Romas Kazlauskas is a great storyteller. Ask him to tell you the origin story about the phrase “the rabbit died”!)