You wouldn’t naturally expect a scientist to have a background in theology, but it turned out to be a benefit for Master of Biological Sciences (MBS) graduate Nate Mylrea. 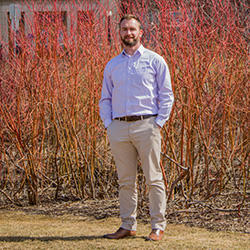 “I have an undergraduate degree in biology with a minor in religious studies,” Mylrea says. “And they both inform each other quite a bit. Religion is often a way that people try to express the meaning of life, while biology is the study of that life.”

“When you’re studying religion,” he continues, “you’re trying to determine what morality is and what existence is about, but in science the deeper you go, the more you realize how difficult it is to answer those questions.”

Mylrea enjoyed every subject in college, particularly history and English. “But science is kind of fun because it’s changing so much and it’s so connected to technology. It’s cutting its way through the history of humanity—that’s why I was attracted to it.”

Mylrea was working as an analytical chemist, developing testing methods for a pharmaceutical company in Massachusetts, when he decided to return to Minnesota to be closer to friends and family.

“I think I knew I always wanted to go back to school,” he says. “I wanted to get back into academia and avoid hitting that level of stagnation where you’re doing the same thing over and over again. It was 2008, and not a lot of companies were hiring. For a few years, I was a chemist for hire.”

In 2010 Mylrea began researching graduate schools. He heard about the part-time University of Minnesota’s MBS program, so he attended an information session and registered for a cellular biology course. From there, he was hooked.

“I saw it as my best opportunity to go back to school and keep working,” he says. “I loved it. People always say it must be crazy, but you get used to it. The biggest thing is finding the energy and time.”

“The program is self-determining, so you can make it whatever you want. It can be daunting, but there are good templates to follow in terms of courses you could take depending on what you want to go into. Be thinking about your capstone project throughout and stay flexible and positive.”

Mylrea paced himself, taking one course a semester while working full time. “Three or four days after work I would just come to campus and go to the library and study.” Soon after he started the MBS program, he got a full-time job at Pace Analytical.

At Pace, Mylrea manages a group of five analytical chemists in the Life Sciences Division which supports and performs chemical and physical testing of products—pharmaceuticals, transdermal patches, inhalers, catheters, etc.—in development or already on the market.

As a manager, he now often calls on “soft skills” to handle human resource and organizational issues.

He is learning how to understand workplace equity and promoting teamwork and trust. “I need people to share work and fill each other in. Cooperation can sometimes be hard, but everyone wants to succeed.”

To stay fresh and up-to-speed, Mylrea still digs into the hands-on work when he can. “It can be tough to manage a team if you don’t know what they’re doing in the trenches. I try to limit my desk work when possible.”

“There are a lot of opportunities to be a supportive influence, but you also have to keep the team performing. It can be challenging but also really rewarding.” 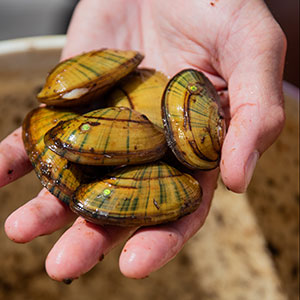 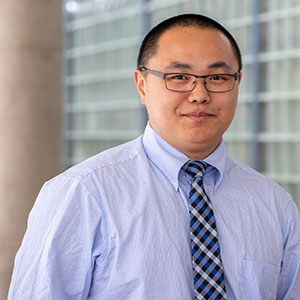