The (Maroon and) Gold Standard

Did you know that an undergraduate student today would have to work 51 hours per week to pay for the cost of college? Or that Pell Grant students who receive scholarships of $10,000 or more graduate on time and at a rate 30 percent higher than their peers who do not receive support? How about the fact that the College of Continuing and Professional Studies (CCAPS) has one of the highest Pell Grant-eligible student populations within the University of Minnesota Twin Cities?

Couple this with what most of us know about Minnesota’s aging and increasingly diverse population, and the ever-accelerating need for quality, skilled nursing care, and you have an intergenerational and intercultural challenge of novel proportions.

Enter Monarch Healthcare Management. An enthusiastic supporter of CCAPS, particularly the College’s Health Services Management and Long Term Care programs, Monarch was created to change the way both short-term rehabilitation and long-term health care is delivered to an aging population in need. At the heart of their mission are a commitment to innovative care and five-star customer service that puts residents, tenants, and families first.

Key to this mission is an ongoing need for well-educated employees who can deliver a range of in-demand services and who, collectively, have expertise in all aspects of senior care in order to ensure operational efficiency. Also key is Monarch’s commitment to being a sought-after place to work, which includes, both in theory and in practice, a commitment to creating a culture of inclusion, equity, and diversity that benefits staff and residents alike.

As part of this effort, the Mankato-based company is participating in a federal- and state-sponsored program that bolsters healthcare reform. When Monarch applied to the multipronged program, they were the only organization to choose to focus solely on Diversity, Equity, and Inclusion (DEI).

But how does one attract and retain a highly skilled and diverse workforce in Minnesota? CCAPS has something to say about that. (It’s a bit chicken-and-egg, but you can see where this is going.)

A loyal internship provider for the College, Monarch regularly hires CCAPS graduates, and with the health care industry’s growing need, not to mention Monarch’s distinct goals, it made sense to lend a much-needed hand in financially supporting the education of future health care professionals.

A loyal internship provider for the College, Monarch regularly hires CCAPS graduates, and with the health care industry’s growing need, not to mention Monarch’s distinct goals, it made sense to lend a much-needed hand in financially supporting the education of future health care professionals.

In January, the company partnered with the University through the Bentson Scholarship Challenge to establish and endow the Monarch Healthcare Management Scholarship in CCAPS, thereby making college possible for generations of Pell-eligible undergraduates.

A young company, Monarch acquired their first facilities in 2015 and currently runs 32 skilled-nursing and several assisted living facilities throughout Minnesota, as well as one in Superior, Wisconsin.

As their growth and reach expands, the Monarch Healthcare Management Scholarship is just one of the many ways to underscore their commitment to innovative care, five-star service, and DEI. By actively helping to educate and support a diverse and cross-disciplinary generation of students, particularly those who may be prospective employees, Monarch simultaneously helps to reverse an alarming national trend in higher education: lower rates of admission, retention, and graduation for students with financial need. And because the Monarch Scholarship is designed to follow recipients throughout their CCAPS journey, it greatly reduces their financial burden and student debt. 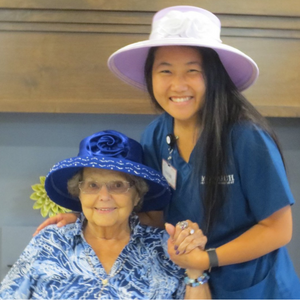 "Part of committing to the Scholarship is us saying that it's our responsibility to bridge the gaps,” says Vice President of Operations Daniel Strittmater, MHA ‘06. “We haven't been around for very long so it's about being dynamic, modern, and progressive, and changing the way that nursing home care is done, and to do it in a way so everybody has to change. We just feel strongly like we want to promote diversity in leadership because that's really going to help with diversity throughout the organization. That's the right thing to do and it's a smart business thing to do.”

In 2021 Monarch was named a Health Care Industry Top Place to Work and a Top USA Work Place, an award that “celebrates nationally recognized companies that make the world a better place to work together by prioritizing a people-centered culture and giving employees a voice.” The award, based entirely on feedback from employees, shows the company is well on its way to being a sought-after employer.

“We are proud of our accomplishments,” says Strittmater, “and we're very much a Minnesota company. We thought about that early on and said Minnesota is a more fair and friendly place [to do business] in many ways. We want the exposure there for students who want to come work for us and parents to think we're a good place to work, a place for opportunities.

"We employ a wide variety of students from different colleges and universities, but I definitely think the students from CCAPS have been extremely resilient… It's a very diverse program and I think that represents part of our recruiting future.”

"We employ a wide variety of students from different colleges and universities, but I definitely think the students from CCAPS have been extremely resilient… It's a very diverse program and I think that represents part of our recruiting future.”

One of Monarch’s overarching goals is to disrupt the way that nursing homes have traditionally operated. Issues regarding this have included culinary (improving food services using a regional approach); regulatory (surprising the Minnesota Department of Health by rehabilitating an acquired facility that was “on the naughty list” prior to Monarch’s purchase); environmental (“We've had a big focus on let's not do things on paper”); operational (“Let's stop doing things a certain way that takes a lot of time”); or technological (using robots created by University of Minnesota Duluth researchers to augment the emotional, physical, and cognitive health of resident). 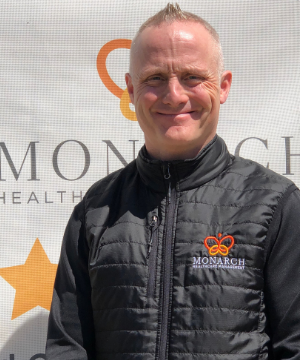 The company, it seems, is already creating a stir. At the heart of this activity is Strittmater, who credits his own University of Minnesota education for what enables his innovative work. Critical thinking, problem solving, process improvement: these are the skills he learned as a Master of Healthcare Administration student in the School of Public Health. “The University’s MHA program is big on the 14-Step Method, the Minnesota Way, which is problem solving, and that’s the core of what I spend my time doing.”

But robots as disruptors? “Robots are a great example,” says Strittmater. “If we started using robots and it worked, then people can’t not use robots!”

And so, in January, robots began working in several Monarch facilities, including those on the Iron Range and in Rochester, Redwood Falls, Plainview, Faribault, and Anoka. The robot residency grew out of a unique partnership between UMD, Monarch, and the State of Minnesota. It also marks the “first time in the United States using humanoid robots to provide care for the elderly,” according to Dr. Arshia Khan, lead researcher and professor at the Swenson College of Science and Engineering.

The facilities all received one Neo (a small robot) and one Pepper (a large, nearly three-foot tall robot) who focuses on cognitive interactions and begins by telling a joke. Neo does yoga.

“It's been established that they [the robots] can make a difference,” says Strittmater. “And she [Dr. Khan] is trying to study how we could improve the quality of people's lives.”

The first Monarch Healthcare Management Scholarship will be awarded in fall 2022. Its purpose is to provide support to Pell-eligible undergraduate transfer students admitted to CCAPS. Learn more about CCAPS scholarships.