The Choice to Learn

“I always knew I wanted to study computer science,” says Zeng, whose interest in coding evolved naturally from his love of playing computer games. “But in China, getting accepted to specialized schools of study is really difficult. In America, it’s a choice anyone can make. You get to decide what you want to study, no matter what level you’re at when you enter the program.”

The opportunity to choose what he was passionate about led him to study in the US, but it was the Minnesota English Language Program (MELP) that brought Zeng to the U of M specifically. He was looking for a strong program that could help him develop his English speaking skills. With MELP, that’s what he got.

“My friends who had lived abroad told me to practice my English as much as possible before leaving China,” Zeng says. “I thought I already had a good understanding of English because I was exposed to it as a child. My parents sent me to an enriched school to learn.” 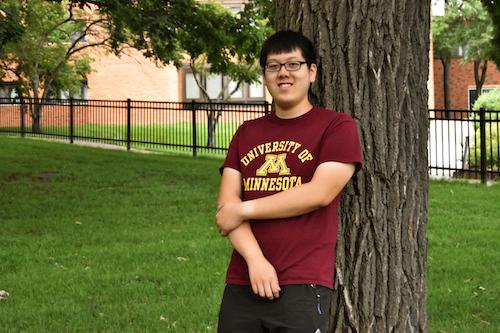 But when Zeng arrived on campus at the U in August of 2015, the culture shock made him feel that he was worlds away from speaking fluently with others. That shock started to fade away with Zeng’s MELP classes and activities.

“The MELP teachers were really friendly, and they made the classes fun. We would do speaking, listening, and writing exercises, as well as presentations, and that was great for learning English,” Zeng says.

Once Zeng developed a strong base for his speaking skills, everything grew from there. He attended Culture Talks, a biweekly event hosted by MELP where international students have the opportunity to relax, practice their English speaking skills, and play games. Zeng also attended many field trips led by MELP staff, too.

“One of my favorite things I did with MELP was go to an orchard to pick apples,” Zeng says. “There was also a pumpkin patch. It was really fun. I shared photos from the orchard on my Chinese social apps and Facebook.”

Besides having fun in MELP, Zeng was making an effort to have more conversations in English—something other Chinese classmates weren’t doing enough of. Zeng tells about how his Chinese friends only speak to one another in their native tongue.

“I think making mistakes is very common when we’re speaking because we’re not native English speakers,” Zeng says. “But if you’re coming to MELP to improve your English, the first thing I’d suggest doing is trying to speak English! It seems obvious, but many students don’t do this.”

Zeng’s English develops a little bit more with every conversation he has. And his acclimation to American culture is progressing rapidly, too. With his newfound English proficiency, he was able to apply and be accepted to the computer science program at the U. His days now are spent studying, playing video games, listening music on the East Bank plaza, creating new recipes at home (his specialty is beef teriyaki with green peppers and potatoes), and playing sports at the Rec and Wellness Center with friends. Of course, he’s using his English to enjoy all of these things.

“I want to stay at the U of M and finish my BA in computer science,” Zeng says. “Maybe I’ll get my master’s degree after that, or maybe I’ll find a job and start getting work experience.”

It’s all possible. The choice is his.