The Play's the Thing

MELP and the Bridge of Language

All rows, left to right.

This is “my first time in a theater in my life,” Luis shares after everyone is settled in their seats. He explains that in his hometown of Axochiapan, Mexico, popular cultural activities typically involve music and dancing, and that it’s participatory—the audience, artists, and musicians all taking part.

Luis Adrian Delgado Martinez is just one of several high-spirited Minnesota English Language Program (MELP) students who have gathered on a brittle pre-solstice day to see the Guthrie Theater’s 48th-annual production of A Christmas Carol. 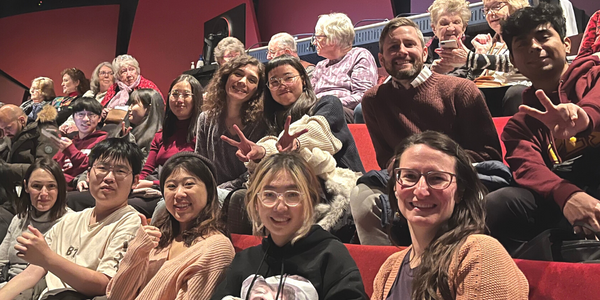 The outing marks one of several field trips made possible through the generous support of people to the MELP Fund, which is used to not only help multilingual learners improve their English language skills, but also to learn about American culture and develop the cultural understanding and  communication, critical thinking, and academic skills necessary to be successful in academic, professional, and social settings.

On this particular day, Level 1 and Level 2 students who hail from Belarus, China, Jordan, Mexico, Saudi Arabia, South Korea, Taiwan, and Turkey are in the audience. In the weeks prior, they read an adaptive Stage 2, 900-word vocabulary version* of Dickens’s classic English novella. Some students watched TV and film adaptations as well.

Evidence of what they have learned is made clear when there is the occasional gasp, a shaking of heads when the tight-fisted, cold-hearted Ebenezer Scrooge spits his venom: "Are there no prisons?" he shouts when suggesting they be used to house the poor and destitute.

In contrast, “Bah, Humbug!” is met with the type of laughter that comes with character recognition, familiarity.

Act I, Out and About

Throughout the fall semester, MELP students participated in a variety of field trips.One took them to the Southeast Asian Literature, Culture, and Media Library, which is curated by the Department of Asian & Middle Eastern Studies. Another went to the University’s campus in Saint Paul to learn about Japanese forest bathing. They also visited the Pillars of Prospect Park, a senior living community with close ties to the University. There, they interviewed residents about their life experiences.

“The purpose of these field trips is to allow MELP students to use their English in authentic contexts, while exploring the diverse resources that the University offers.”

Other learning experiences included a visit to Tate Hall, where geologists explained their work researching volcanoes and earthquakes. At the Toaster, a 6,500-square-foot innovation hub dedicated to student innovation and entrepreneurship located in Walter Library, students received a demonstration of some of the technology available to them at the innovation hub, including virtual reality headsets and 3D printers. 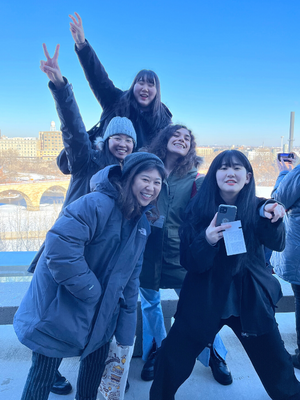 “The purpose of these field trips is to allow MELP students to use their English in authentic contexts, while exploring the diverse resources that the University offers,” says Teaching Specialist Catherine (Kate) Clements. “I consider the field trips to be a crucial component of this class, and students really enjoy them too. Some students have made connections with people in their future majors during these field trips.”

“These trips help me to participate in many different things that I have never experienced before. It is colorful for me,” says Dexiang Shu.

“While we participated in MELP trips, I could understand American culture and I had opportunities to meet new friends,” echoes Hyejoo Nam.

While academic-centered outings bolster English language skills and provide first-hand experience with both the University and aspects of American culture, MELP students also engage in organized and self-created social activities. Semi-structured gatherings such as Culture Talks, also encourage conversation and the sharing of cultures—activity that’s valued and embraced.

“We have a lot of opportunities to collaborate with a group. It is beneficial that I learned a lot of knowledge, and we can communicate with each other to study English,” says Chengyi Liu.

“Of course it helps me to improve my English,” shares Yaraslau Banchuk, “because we talked about our feelings, not only about University’s topics.”

“We have a lot of opportunities to collaborate with a group. It is beneficial that I learned a lot of knowledge, and we can communicate with each other to study English.”

Whether in the classroom, on a field trip, or in conversation with their friends, one is inclined to agree with Ghadeer Alshehri: “Practice the most thing help to learn any language.”

International Student Advisor Sara Schroth believes “MELP is a launchpad for success. I think students are looking to open doors for themselves when they enroll in MELP. With improved English proficiency, students have greater opportunities to advance their education, their careers, and their intercultural competency.”

Act III, The Power of Story

A Christmas Carol was first published as a novella in 1843. Founded in 1963, the Guthrie Theater has been sharing Scrooge’s story of transformation with audiences since 1975 (and counting). But even after 48 productions, the Guthrie delights in sharing that nearly half of the audience is new and experiencing the play there for the first time. 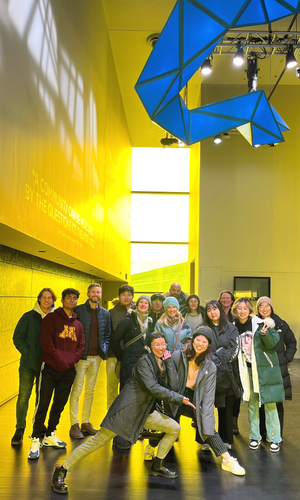 Two hours after the conceptual curtain closes, Luis says the experience was “really exciting and fun.” Ibrahim Algahtani found the play helpful: “This first for me. I see the Christmas and I see this people doing the Christmas face-to-face.”

"The story wasn’t just about Christmas,” notes Abeer (Abbi) Aseeri. “It’s about life and how people changed during life without noticing that, so everyone needs something to remind them how he was and what he became.”

“A Christmas Carol is similar to a story in my culture. The story is called 흥부와 놀부 (Heungbu and Nolbu).  The story’s lesson is to be a kind person. The good triumphing over the evil is an important theme in the story,” suggests Hyejoo.

Still others weigh in with stories. Yaraslau shares a tale about a little swan. “He was lost when he was child and lived with other home animals such as chicken, ducks, dogs, turkeys. And they called him 'ugly duck' because they didn’t know that he is swan. But after he increased [grew], he stay beautiful and he found his family and left his old home.”

Epilogue, Language as a Bridge

It’s been suggested that learning a new language is one of the best introductions to a culture that is not our own. Learning a language is immersive. It opens the mind. It’s a gateway to both the universal and the unfamiliar. MELP students know this. Language is a bridge.

In the days following A Christmas Carol, students were asked to share a popular holiday or tradition that is observed in their respective countries. The purpose? So it could be published here—for you, the reader—and so we can all benefit and learn from the bridge that is language, and so much more.

"Eid is a popular holiday in Saudi Arabia. It's a religious holiday, but all people celebrate it even if they are non-religious because it’s that time of the year when all friends and family gather together and enjoy the food. You can see all the kids are wearing new dresses and playing. Mostly we start the first Eid day by visiting our elders to get their blessing. The people who work or live far away during these holidays travel to be with their family." —Abeer (Abbi) Aseeri, Saudi Arabia

"In Belarus we don’t celebrate Christmas, but the most important holiday is New Year. During this holiday, we gift something to someone and meet together with our families [on] December 31." —Yaraslau Banchuk, Belarus

"Winter solstice is a popular holiday in Taiwan. It is celebrated on December 21 or 22 every year. It's an important tradition because people want to hang out with family and friends. We can meet each other next year when we are together. We will eat Tangyuan** because the similar meaning in Mandarin is union." —Shih-Ying (Joyce) Chou, Taiwan

"Ramadan is a popular holiday in Turkey. This is religion day. During this day, people come together to eat and prepare something. For 30 days, people have invited their family and friends to their home." —Cagla Gokgoz, Turkey

"Spring festival (Chinese New Year) is the most important festival in China. The first day of the lunar calendar every year. This day is when the whole family eats together." —Chengyi Liu, China

"In Mexico we celebrate Christmas Eve (Noche Buena) because we celebrate the birth of Jesus. Normally in this day, people celebrate with their family and make a dinner." —Luis Adrian Delgado Martinez, Mexico

"In my country, I have two Eids, one after Ramadan called Eid Al-Fitr and one called Eid Al-Adha. This one is for giving meat to poor people and visiting all the family and eating sweets. In Eid Al-Fitr everyone is eating breakfast together and after that, going to visit uncles." —Mohammad (Nick) Mishael, Jordan

"Thanksgiving is a popular tradition in Korea. It is celebrated on 15 August in the Runa calendar.  It’s an important tradition because farmers can celebrate their harvest. People typically eat traditional food such as Songpeon,*** and fruit harvested for the first time this year." —Hyejoo Nam, South Korea

"Spring Festival is a popular holiday in my country. It is celebrated on January 1 of the lunar calendar and we should wear new clothes, reunite with family, and eat New Year’s Eve dinner. The reason why it is important is that it entrusts our Chinese people to miss and unite families, and it is also a good expectation for the future." —Dexiang Shu, China

"The Mid-Autumn Festival is one of the most popular and historical holidays in China. It’s celebrated on August 15 in the lunar calendar. People typically have lunch (or dinner) with their family, and see the beautiful moon together with tea and mooncake, a pie shaped like the moon at night because the moon is the biggest around the year on that day. The reason why it’s an important tradition is that we always think the full moon means reunioning with family." —Xuran (Mona) Zhuang, China

* Charles Dickens, A Christmas Carol (simplified edition, Longman Group UK Limited, 1987)
** Tangyuan is a traditional dessert made of glutinous rice shaped into balls and served in hot broth or syrup.
*** Songpyeon is a traditional Korean food made of rice powder. It is a type of tteok or rice cake.

Want to support MELP students? The Minnesota English Language Program Fund helps to support activities like those shared in this story.